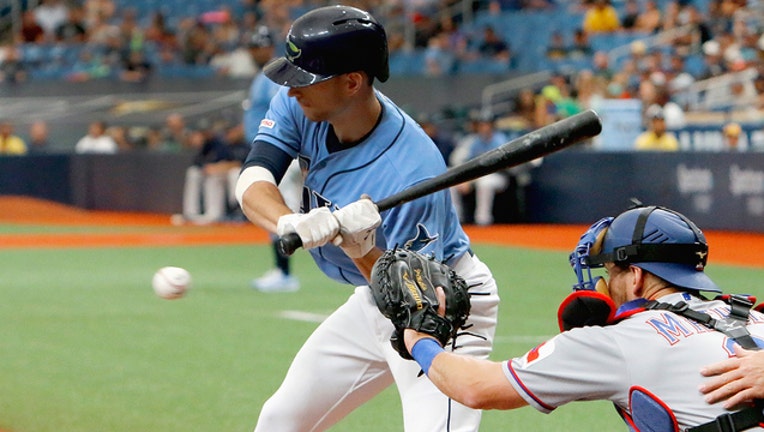 ST. PETERSBURG, Fla. (AP) - Blake Snell has felt good on the mound despite not getting a lot of wins.

After a difficult stretch, the left-hander got a good outcome Sunday.

"The way that I feel and what I'm doing I believe it's better than last year," Snell, the reigning AL Cy Young Award winner, said. "Consistency, swing-and-miss, strikes, less walks, weak contact, everything. The only thing that's bad is ERA and length that I'm going in starts."

"Did a lot of things actually very similar to what he's been doing," Rays manager Kevin Cash said. "Just a little better at command and location to those pitches."

"He wasn't really doing that before," Rangers manager Chris Woodward said. "When he's ahead in the count, he's a Cy Young winner for a reason."

Tommy Pham homered for the Rays, who won consecutive games for the first time since June 9-10. The first AL wild card leaders went 13-16 in June.

Texas got a two-run homer from Joey Gallo.

After Kevin Kiermaier had an RBI single and Willy Adames added a run-scoring single off Jesse Chavez (3-3) the fourth, Pham's fifth-inning solo shot made it 4-2.

Kiermaier had an RBI triple in a two-run eighth.

Gallo's two-run homer in the fourth off Snell got stuck on the "D-Ring" catwalk, which is approximately 70-feet above the right-field seats.

"I didn't notice that it didn't come down," Gallo said. "But that was a pretty cool home run off a guy who's really nasty."

Gallo had the only Texas hit through three innings, a leadoff bunt single in the second against a shift that had four outfielders and three infielders on the first-base side of second.

He was thrown out on another bunt attempt in the seventh against Colin Poche with a runner on first and no outs, and Texas trailing 4-2.

"Obviously a lot came into play," said Gallo, who talked with Woodward about the situation before the at-bat. "It's a tough lefty who struck me out the day before. Obviously if I lay one down and get it a little more over to the left, we're having a different conversation about it."

Cash was ejected by plate umpire Bruce Dreckman in the second for arguing after Avisail Garcia took a called third strike.

Rays two-way player Brendan McKay could hit before the All-Star break. "If there's an opportunity to get him in there where we feel it's a fit with his workload we'll do that," manager Kevin Cash said. McKay allowed one hit in six innings Saturday to get the win in his debut against Texas and is scheduled to pitch against the New York Yankees Friday night.

Rangers: 2B Rougned Odor, hurt Friday running the bases, was scratched due to lingering left hamstring tightness but pinch-hit in the ninth. ... 3B Asdrubal Cabrera sat out with lower back tightness.