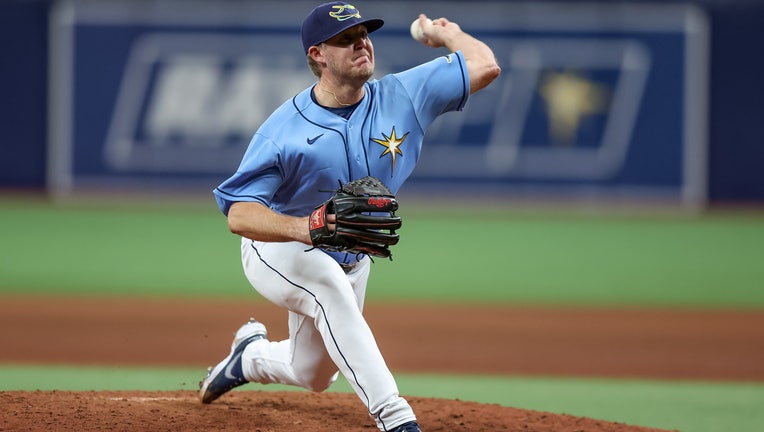 ST. PETERSBURG, FL - SEPTEMBER 25: Garrett Cleavinger #60 of the Tampa Bay Rays pitches against the Toronto Blue Jays in the eighth inning during a baseball game at Tropicana Field on September 25, 2022 in St. Petersburg, Florida. (Photo by Mike Carl

The New York Yankees hold a comfortable lead in the AL East, and Sunday's loss eliminated the third-place Rays from the division race, according to the Elias Sports Bureau.

Toronto (86-67) opened a two-game lead over Tampa Bay (84-69) for the top AL wild card with nine games left. Seattle (83-69) is 2 1/2 games back of the Blue Jays and a half-game behind the Rays after blowing a big lead in a 13-12 loss to Kansas City. Baltimore remains four games behind the Mariners for the third and final spot.

"I think we're kind of where we need to be," Blue Jays interim manager John Schneider said. "I think we've kind of continued to put ourselves in position if we do get into the postseason, we're in a good spot."

The Blue Jays return home for six games against the Yankees and Boston before heading to Baltimore for three.

The Rays close out the regular season with a nine-game trip to AL Central champion Cleveland, AL West champion Houston and Boston.

"We control our own destiny on this," Tampa Bay infielder Taylor Walls said. "Not winning today hurts a little bit, but at the same time we have enough games ahead of us if we play well enough, I’m pretty confident that we can be where we want to be."

Toronto allowed 20 runs in losing the first two games of the series, but limited Tampa Bay to a total of two runs in winning the final two.

"We showed that we can fight and not quit," Springer said. "We got down pretty quick to an extremely talented ballclub that's playing well. To get down and to split, it's huge."

Ross Stripling (9-4) permitted one run and six hits in five innings. Zach Pop, Adam Cimber, Trevor Richards and Yusei Kikuchi combined to give up one hit over four innings.

Rays All-Star Shane McClanahan (12-7), pulled in the fifth inning of his previous start due to neck tightness, gave up four runs and six hits, including a career-high three homers, over five innings.

McClanahan said he is healthy, but struggled with command. This was his third start since spending 15 days on the injured list with a left shoulder impingement.

The left-hander is 2-4 with a 4.26 ERA in nine outings since the All-Star break.

Springer had a two-run shot in the third and added a fifth-inning solo drive for his 23rd homer this season as the Blue Jays took a 4-1 lead. He finished with three hits in his 20th career multi-homer game — 19 in the leadoff spot. Only Mookie Betts (20) has more in major league history.

Kirk had a solo homer during the second, and Hernández made it 6-1 with a two-run homer in the eighth off Garrett Cleavinger.

Randy Arozarena pulled the Rays to 3-1 on a sacrifice fly in the third.

Retiring Rays bullpen coach Stan Boroski and major league medical coordinator Paul Harker threw ceremonial first pitches. Boroski is in his 13th season with the team, while Harker joined the Rays for their inaugural season in 1998.

Rays: Franco jammed his left hand and wrist on a swing but is fine, according to manager Kevin Cash. Franco missed 51 games this season with a broken right hamate bone. ... 3B Yandy Díaz (left shoulder) was out of the lineup for the sixth straight game but could start Tuesday. … RHP Tyler Glasnow (Tommy John surgery) is scheduled to rejoin the rotation Wednesday night at Cleveland.