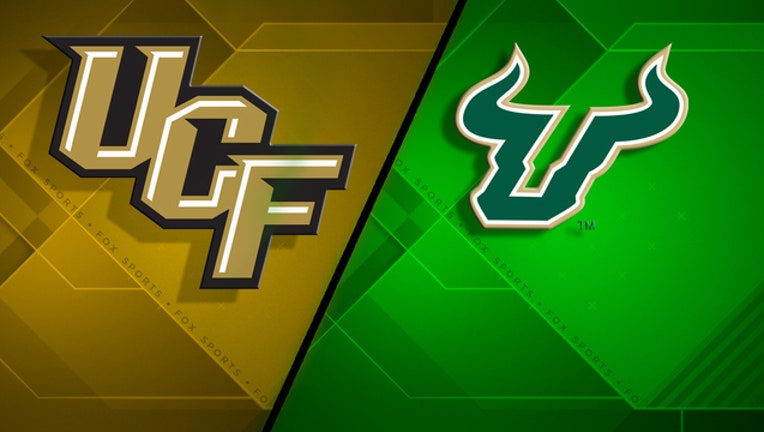 ORLANDO, Fla. (AP) - When the No. 13-ranked UCF Knights and No. 22 South Florida Bulls tangle in their annual rivalry game, it's always an emotion-filled grudge match.

This year's showdown will also be the prelude to a potential championship and another step toward a major bowl bid.

UCF (10-0, 7-0) and USF (9-1, 6-1) will play Friday for the American Athletic Conference's East Division title and a spot in the Dec. 2 AAC Championship Game against Memphis, which already has clinched the West Division.

"I don't have to do anything to get our guys ready to play this one," UCF coach Scott Frost said. "I hope every seat in the stands is full. If we can get it loud and rocking in there, that gives us an advantage. It's another chance to showcase who we are and what we've become."

Two seasons ago, before Frost was hired, the Knights finished 0-12. Now they are undefeated.

"That team is very explosive and it's a well-coached team," Strong said. "They play with a lot of energy and a lot of emotion. It's going to be a really big challenge for us. We have to play at our best. That's the only way we can win this game. We have to play our best."

Strong, the former Texas coach hired after last season when Willie Taggart jumped to Oregon, said the Bulls have yet to play a complete game.

But USF's defensive improvement provides confidence against UCF's offense, which leads the nation in scoring at 48.2 points per game. The Bulls are 21st nationally in total defense, a drastic departure from 2016, when they ranked 120th.

The Bulls will need sturdy defense against UCF quarterback McKenzie Milton, who is eighth nationally in total offense (330.1 yards per game) and running back Adrian Killins, who averages 7.5 yards per carry.

Flowers "is most dangerous when things break down," Frost said. "He can make nine guys miss and go 60 (yards). We've got to keep him contained and that's hard because he can make plays with his arm and his feet."

Frost and Strong agreed that the game's biggest factor probably can't be quantified. The emotion of a rivalry game can cause unexpected twists and turns.

"If there needs to be a motivational speech for any player in this game, then there's something wrong," Bulls center Cameron Ruff said. "We've been looking to this game all year. We had a feeling it was going to come down to this game. It's in our hands. We're the writer of our own story."

"This is exactly what we wanted, the conference championship is on the line," Knights tight end Michael Colubiale said. "We know that emotions are going to be running really high for both teams and it's going to be a really hard-fought game. I don't think we'd have it any other way."

Some other things to know about Friday's USF-UCF showdown:

HIGH EMOTIONS: The USF-UCF rivalry game is part of the "War On I-4" department-wide sports series between the schools, which are separated by 90 miles of Florida's Interstate 4. Last season marked the debut of the football game's War On I-4 Trophy, a 160-pound, 4-foot-3 trophy that includes a detachable pewter replica of an I-4 road sign. USF leads the series 6-2.

EXPLOSIVE ATTACK:  UCF has scored at least 30 points in each of its games this season and that 10-game streak leads the nation for consecutive 30-point games.

DUAL-THREAT: Flowers, just the seventh FBS player to have 7,000 passing yards and 3,000 rushing yards for a career, ranks 13th on the all-time list of FBS quarterback rushers (3,464). By maintaining his career average, Flowers will finish in the all-time top 10.

IMPRESSIVE STATS, TOO:  Milton, who ranks second nationally in passing efficiency (186.1), has five 300-yard passing games this season. That's tied for third on UCF's single-season record book, along with two players who reached the NFL, Blake Bortles and Daunte Culpepper.

STRONG FACTOR: Strong's only other meeting against UCF was in 2013, when his Louisville Cardinals lost against the Knights 38-35 in a game that ultimately decided the first AAC title.