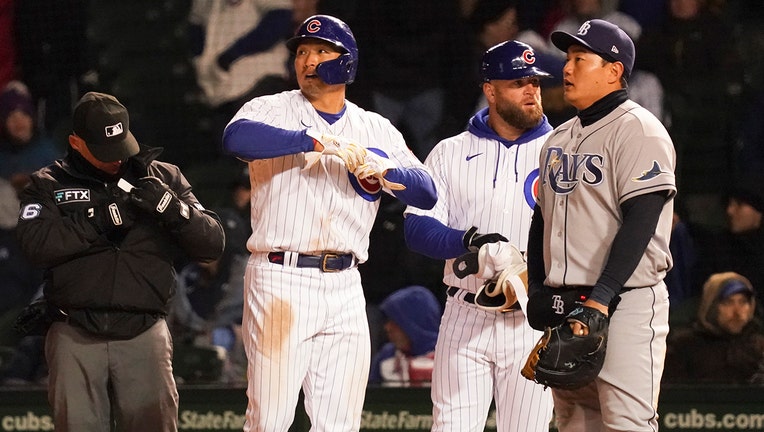 CHICAGO, ILLINOIS - APRIL 18: Seiya Suzuki #27 of the Chicago Cubs reacts after a single during the eighth inning of a game against the Tampa Bay Rays at Wrigley Field on April 18, 2022 in Chicago, Illinois. (Photo by Nuccio DiNuzzo/Getty Images)

TAMPA, Fla. - Rookie Seiya Suzuki extended his hitting streak to nine games, tying Akinori Iwamura for the longest by a Japanese-born player at the start of a major league career, and the Chicago Cubs beat the Tampa Bay Rays 4-2 on a cold Tuesday night.

Suzuki singled to left leading off the fourth inning, matching the mark that Iwamura set with the Rays in 2007 and tying Andy Pafko's record for a Cubs player at the start of his career, set in 1943. Suzuki was thrown out by left fielder Randy Arozarena trying to stretch his hit to a double, a call upheld in a video review.

There were intermittent snow flurries before the game, and the temperature at gametime was 40 degrees with a 16 mph that caused a 34 windchill. Several Rays wore handwarmers.

Ian Happ's RBI single in the eighth against Jeffrey Springs broke a 2-2 tie and drove in Suzuki, who was hit by a pitch from Jason Adam (0-1) leading off the inning.

Frank Schwindel homered to right in the eighth off Javy Guerra, who made his Tampa Bay debut, one day after he was acquired San Diego for cash.

Keegan Thompson (2-0) got Arozarena to ground into an inning-ending double play in the fifth and struck out five in 3 2/3 innings while allowing one hit.

David Robertson pitched around a walk in the ninth for his fourth save in four chances, one shy of the 37-year-old right-hander's total from 2018-21. He retired Manuel Margot on a game-ending groundout.

Patrick Wisdom hit his first home run of the season in the second, a drive about three-quarters up the left-field bleachers. The two-run drive scored Suzuki, who reached on a throwing error by shortstop Taylor Walls.

Wisdom has seven hits in his last four games after starting the season 1 for 21.

Tampa Bay tied the score on RBI singles by Ji-Man Choi in the fourth and Josh Lowe in the fifth.

Rays: SS Wander Franco was a late scratch due to quadriceps tightness. The 21-year-old is batting .381 with 16 hits in 10 games.

Cubs: LHP Wade Miley is set to throw in the bullpen on Tuesday as he works back from left elbow inflammation. ... SS Andrelton Simmons is to take batting practice on Tuesday with the Arizona Complex League Cubs as he rehabilitates from a shoulder injury that has kept him out since late March. RHP Alec Mills will batters with the Arizona Complex League Cubs on Tuesday after going on the 10-day IL on April 7 with a lower back strain.