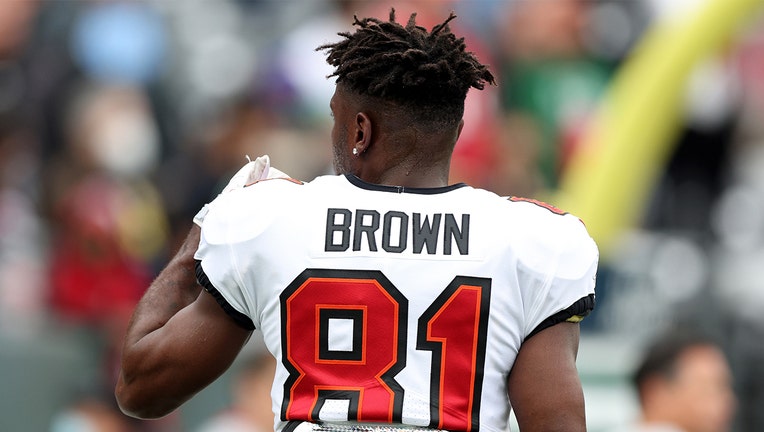 EAST RUTHERFORD, NEW JERSEY - JANUARY 02: Antonio Brown #81 of the Tampa Bay Buccaneers looks on against the New York Jets during the game at MetLife Stadium on January 02, 2022 in East Rutherford, New Jersey. (Photo by Elsa/Getty Images)

TAMPA, Fla. - Tampa Bay came from behind to beat the New York Jets in a game that saw Antonio Brown leave the field before it was over. Afterward, head coach Bruce Arians said Brown is no longer a Buc.

Brady coolly led the Bucs on a 93-yard drive in the final minutes for a 28-24 victory over the New York Jets on Sunday. The quarterback will be down yet another target as the Bucs gear up for the playoffs, but Brown's eventual exit appeared to have started in the third quarter.

According to FOX Sports’ Jay Glazer, Arians said Brown refused to go back into the game so the head coach told him he was done for the day. That apparently triggered a meltdown where Brown tossed his pads and jersey onto the sideline, threw his shirt and gloves into the crowd, then ran through the end zone waving to the crowd while the teams were still on the field.

"He is no longer a Buc," Arians said following the team's win. "All right? That’s the end of the story. Let’s talk about the guys who went out there and won the game."

"It’s a difficult situation," Brady said. "Everybody should do what they can to help him in ways that he really needs it. We all love him. We care about him deeply. We want to see him be at his best. Unfortunately, it won’t be with our team. ... I think everyone should be very compassionate and empathetic toward some very difficult things that are happening."

Brady connected with Cameron Brate for a touchdown on fourth-and-goal from the 4 shortly after Brown’s exit, and the QB finished the Bucs’ rally with a 33-yard touchdown pass to Cyril Grayson with 15 seconds

It’s the third time in the last two years a team has cut Brown. But he wasn’t the only Buc who left the game early. Running backs Ronald Jones and Ke'Shawn Vaughn were both injured in the dramatic come-from-behind win.

Now, as the Bucs shoot for home advantage in the playoffs, they’ll be without several key offensive stars. Chris Godwin is out for the season, Leonard Fournette is on the injured reserve list, and Mike Evans is playing hurt

If Brady and the Bucs hope to capture the Lombardi Trophy again, they’re going to need to dig deep on the depth chart. Practice squad player Cyril Grayson proved himself in yesterday’s final drive. They’ll have one more week to work things out before the playoffs start and this offense has to contend with much tougher defenses.

The game featured the largest age gap between starting quarterbacks since at least 1950, with the 22-year-old Wilson facing the 44-year-old Brady.

The Jets took a two-touchdown lead on Ty Johnson’s 1-yard run that capped their opening drive of the second half.

Brady, who improved to 31-8 against the Jets, also tied Green Bay’s Aaron Rodgers as the only players with three seasons of 40 or more TD passes.