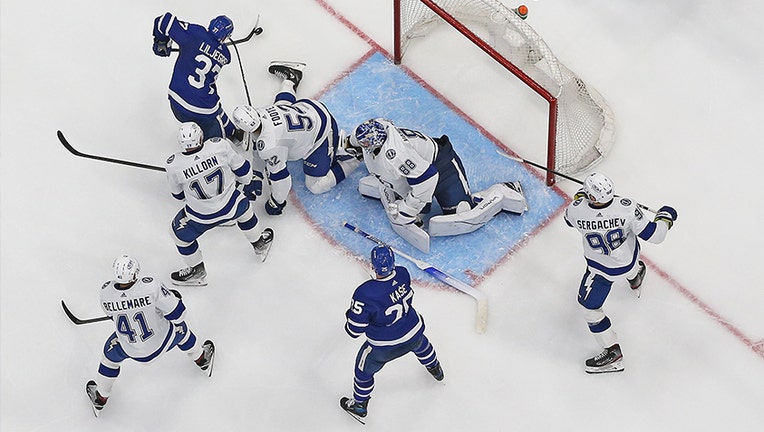 TORONTO, ON - MAY 2: Timothy Liljegren #37 of the Toronto Maple Leafs tries to get a puck past Andrei Vasilevskiy #88 of the Tampa Bay Lightning during Game One of the First Round of the 2022 Stanley Cup Playoffs at Scotiabank Arena on May 2, 2022 in

TORONTO - The Bolts will return to the ice in Toronto in a situation they have been in before – down in a playoff series. In the past, they have shown the ability to bounce back.

In fact, the Tampa Bay Lightning owns the NHL's longest-winning streak following a loss in the playoffs with a record 15 straight wins.

Toronto handed the Lightning their worst playoff loss under coach Jon Cooper in a 5-0 road loss.

"It’s the classic, you’ve got to turn the page," Cooper said, adding he’s confident Vasilevskiy and the two-time defending champions will rebound with a strong performance in Game 2 on Wednesday night.

The Lightning, shut out in the postseason for the first time a Game 7 loss to Washington in the 2018 Eastern Conference Final, hasn’t lost consecutive playoff games since the first round of 2019.

"This isn’t the first time we’ve lost a Game 1 and won the series," Cooper said after practice Tuesday. "It’s not ideal, but it’s not like it’s uncharted water, either."

The Maple Leafs will be without forward Kyle Clifford for Game 2 after the NHL suspended him one game for boarding Tampa Bay’s Ross Colton during the first period of Game 1.