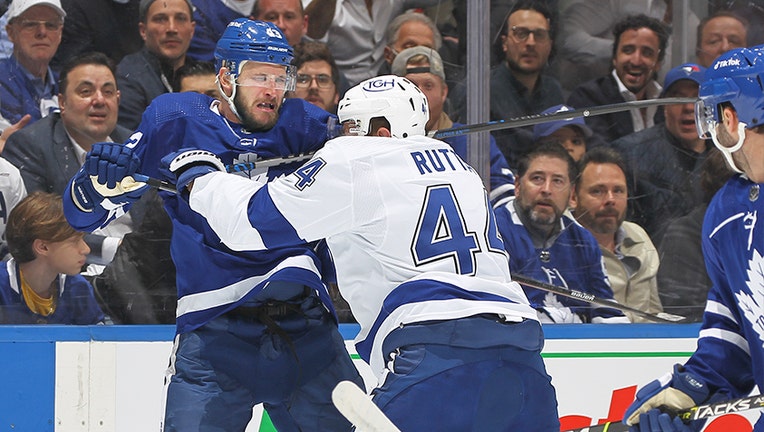 TORONTO, ON - MAY 2: Jan Rutta #44 of the Tampa Bay Lightning retaliates against Kyle Clifford #43 of the Toronto Maple Leafs during Game One of the First Round of the 2022 Stanley Cup Playoffs at Scotiabank Arena on May 2, 2022 in Toronto, Ontario,

TORONTO - Toronto Maple Leafs forward Kyle Clifford has been given a one-game suspension for a boarding incident in Toronto’s playoff-opening win over the Tampa Bay Lightning.

The NHL’s department of player safety issued the suspension on Tuesday following a hearing with Clifford. It described Monday’s incident as a forceful hit to a defenseless player who is no longer in possession of the puck.

Clifford was assessed a major penalty for boarding and a game misconduct 6:59 into Game 1 of the first-round series for a hit on Ross Colton.

The Tampa forward went face-first into the glass, but he escaped serious injury.

Toronto head coach Sheldon Keefe said Tuesday before the suspension was announced that Clifford’s penalty put the Leafs in a tough spot.

The three players were instigators of a third-period fight.