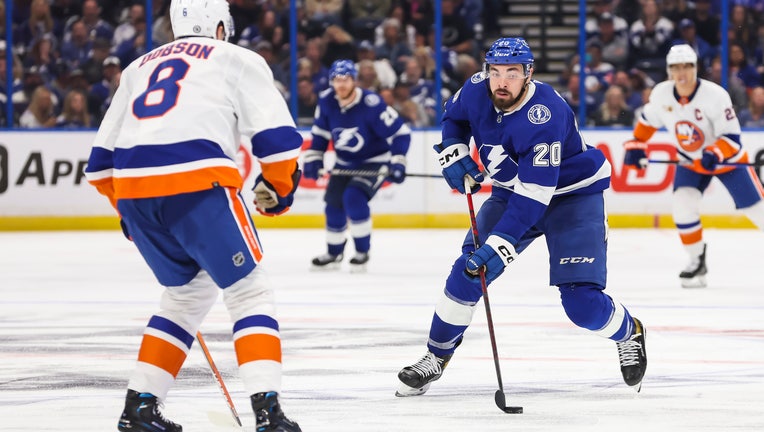 TAMPA, Fla. - Nicholas Paul scored a buzzer-beating second-period goal, Brayden Point had a goal and an assist, and the Tampa Bay Lightning beat the New York Islanders 5-3 on Saturday night.

Tampa Bay also got goals from Brandon Hagel, Corey Perry and Alex Killorn. Backup Brian Elliott made 33 saves to get his 268th career win to tie Don Beaupre for 53rd place on the career list.

The Lightning swept back to back games after beating Florida 3-2 in overtime on Friday night.

"I thought we expended a lot of energy to win that game last night," Lightning coach Jon Cooper said. "But tonight, we didn't execute. I thought we were extremely opportunistic. You have to find ways to win when you're not at your best. You have to grind out some points when you don't have your ‘A’ game."

"A couple, I guess, breakdowns that shouldn’t happen that cost us but overall it was a good effort," Martin said.

The Islanders had a disappointing 4-1 loss to New Jersey Thursday night to end a 2-2-0 homestand.

Paul gave Tampa Bay a 4-2 lead from the right circle off a pass from Ross Colton with one-tenth of a second to play in the period. The sequence started when Tampa Bay’s Cole Koepke forced a neutral zone turnover with a hard check on Nikita Soshnikov.

"I just knew there wasn't a lot of time left," Paul said. "I just knew I had to get it on net in a good spot, so put it low blocker with point-one second to spare."

Lightning captain Steven Stamkos had his season-opening five-game goal streak end after being held without a shot on goal. It only trails Nikita Kucherov’s seven-game run in 2017-18 as the longest in team history.

Kucherov picked up his eighth assist on Point's goal but hasn't scored a goal through six games this season. He had two shots on goal and had an empty-net shot from just inside the offensive zone that hit the post,

The Islanders killed off three Lightning power plays, including a 42-second 5-on-3, and are perfect in 18 short-handed situations. New York failed on three power plays, and are 1-for-15 overall.

Pulock cut the deficit to 4-3 when he skated down the slot to score 5:45 into the third period. Killorn re-established a two-goal advantage with 5:52 remaining.

Point opened the scoring from in-close at 10:43 of the first. The center had a third-period game-tying goal, and added the winner in overtime against Florida on Friday night.

Hagel put the Lightning up 2-1 on the rebound with 1:57 left in the first after Point’s deflected shot went off the crossbar.

Perry made it 3-1 at 3:12 of the second after a strong forechecking effort.

Beauvillier’s long-range backhander trickled between Elliott’s pads to get the Islanders within 3-2 with 10:24 remaining in the second.

Martin tied it at 1 just 1:46 after Point’s goal from the high slot after stealing an errant pass by Perry.

New York RW Josh Bailey, who is three games away from 1,000 in his NHL career, was a healthy scratch. He is pointless in four games this season.

Lightning: D Erik Cernak (upper body) was scratched. He is day to day.

Islanders: Play at Florida on Sunday.