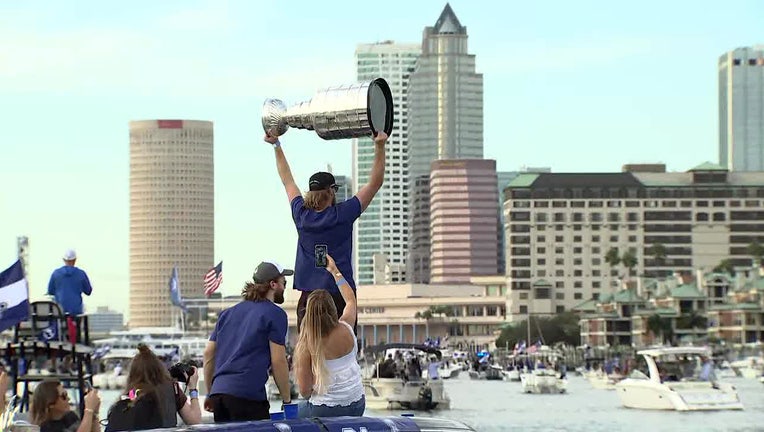 TAMPA, Fla. - Winning Stanley Cup championships in consecutive seasons are rare. The Tampa Bay Lightning are confident they can do it.

Equally important, general manager Julian BriseBois said, is the champs entered training camp with the type of attitude required to give themselves a chance to become just the fourth team in nearly 30 years to win back-to-back NHL titles.

"It’s not going to be easy. It wasn’t going to be easy even with Kuch in the lineup, and now it’s more of a challenge," BriseBois said. "The mindset of the players as a whole, the hunger and how excited they are to get a chance to chase another Cup and go back to back ... I’ve just been really struck by how positive everyone’s mindset is."

The Pittsburgh Penguins were the last club to hoist the Cup in consecutive seasons, winning in 2016 and 2017.

Bowman, a Hall of Famer who won a record nine Stanley Cups as a head coach, was also behind the bench with the 91-92 Penguins following the death of Bob Johnson. He believes it’s more difficult to win back-to-back titles in today’s game.

During a 15-season stretch from 1973-74 through 1987-88, Philadelphia won consecutive titles, Montreal and the New York Islanders each won four in a row, and Edmonton won back-to-back championships on two different occasions.

"I think it’s more of the fact that teams are more fairly equal," said Bowman, now a senior advisor with the Chicago Blackhawks. "Just a certain player or a certain injury, something could throw you off in the next season. How hungry are they?"

Forward Pat Maroon joined the Lightning last year after winning the Cup with St. Louis the previous season. He believes Tampa Bay has all the components necessary to reign again.

That may be true, but there are no guarantees.

"We’re pretty familiar with how we need to play to hopefully have some success. But it’s going to be a grind," coach Jon Cooper said. "All of these teams have improved themselves. It’s a different year, and I think you just have to wipe the slate clean."

To repeat as champions, the Lightning once again will have overcome challenges presented by the pandemic.

"It’s going to be extremely tough, but we’re going to have to rely on ourselves and ultimately other teams, too," said Stamkos, who appears to be healthy again after missing the end to the regular season and all but one game of the playoffs because of a core muscle injury.

"The rules are in place. Everything has gone smooth so far. But we’ve seen what can happen in the NFL, MLB and the NBA in terms of one guy kind of breaking the rules and other guys have to quarantine or not be able to play," Stamkos added. "The NHL has done a great job of putting these protocols in place and the guys have to follow them."

When the team won its only other Stanley Cup title in 2004, Tampa Bay didn’t get a chance to defend the following year because labor strife forced cancellation of the 2004-05 season.

Center Cedric Paquette and defensemen Kevin Shattenkirk, Braydon Coburn and Zach Bogosian are gone, and the Lightning haven’t done a lot to replace them. The team acquired right wing Marian Gaborik and goalie Anders Nilsson from Ottawa, but both will be placed on long term injury reserve.

The pandemic-shortened season begins Jan. 13 at home against the Chicago Blackhawks. Stanley Cup runner-up Dallas won’t have to wait long for a rematch, visiting Tampa on Jan. 17 and 19. The teams are both playing in the Central Division this season due to the pandemic.