TAMPA, Fla. - It’s been 10 months since Noah Kent played a football game on his home field. The Cambridge Christian senior had been counting down the days until he could compete again.

But the middle linebacker tells FOX 13 it’s always been about more than the game.

That is why Noah’s father, Jaime, started a petition Tuesday, urging fall sports at Florida high schools to begin August 24. Since it was posted Tuesday, the petition gained traction on social media with players, parents and coaches using the hashtag #letthemplay.

The petition as of Thursday afternoon, had garnered more than 38,000 signatures.

“It’s only been up for a few days and it already has thousands of signatures,” said Mark Butler, the athletic director of Cambridge Christian. “It’s catching on like wildfire.”

That fire though, could be extinguished Friday, when the Florida High School Athletic Association will vote to decide a date.

Covering these teams as a sports reporter for three decades, Bob Putnam says he’s learned that, unlike volleyball and swimming, the fall season is it for college recruitment.

“All of these others have travel teams that they've been able to be with through the summer,” he said. “Football has nothing else. It's really high school where you get recruited." 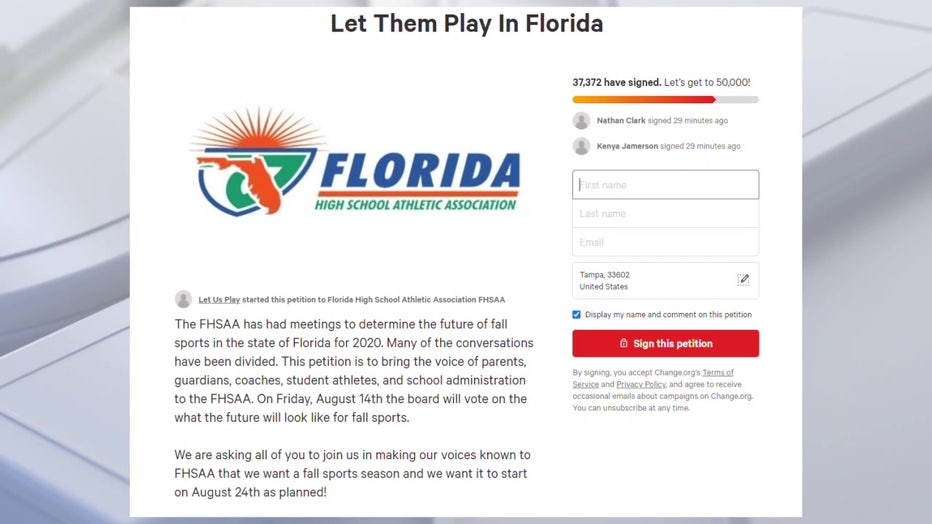 Noah, whose past two seasons were cut short due to injury, put on 60 pounds of muscle in the off-season, looking forward to this one.

"It goes way beyond the bounds of just playing a game,” Noah said. “To just be in a family atmosphere, to be on a team."

Butler explained there are three options on the table now: Start the season August 24th – which would satisfy this petition – push back the season start to November 30, or the third option, start somewhere in-between during the month of October.