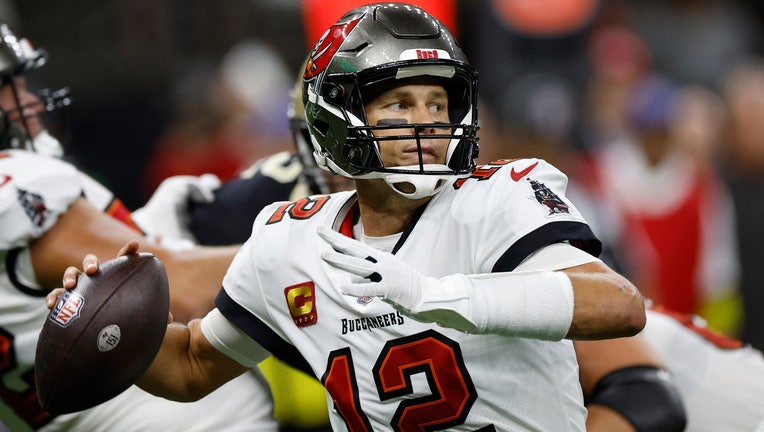 NEW ORLEANS, LOUISIANA - SEPTEMBER 18: Tom Brady #12 of the Tampa Bay Buccaneers throws the ball in the second quarter of the game against the New Orleans Saints at Caesars Superdome on September 18, 2022 in New Orleans, Louisiana. (Photo by Chris Gr

NEW ORLEANS, La. - Tom Brady helped incite a skirmish that led to the ejections of Saints cornerback Marshon Lattimore and Buccaneers receiver Mike Evans, then threw a go-ahead touchdown pass to Breshad Perriman that helped lift Tampa Bay to a 20-10 victory over New Orleans on Sunday.

Brady, who had lost four straight regular-season meetings with the Saints, again struggled for the first three quarters of this latest, testy encounter between NFC South rivals.

Brady’s frustration was clear when he was caught on camera forcefully throwing a tablet to the turf with a healthy turn of his torso and full follow-through of his prolific right arm.

And after his third-down incomplete pass early in the fourth quarter, Brady was shouting at Lattimore when running back Leonard Fournette entered the fray and shoved the Saints' star cornerback. Lattimore responded by shoving Fournette, and Evans rushed in and flattened Lattimore —

Evans was ejected, as he was five seasons ago. But this time, so was Lattimore.

With Paulson Adebo sitting out with an ankle injury, Lattimore's ejection left the Saints without their top two cornerbacks — and Brady took advantage.

On Tampa Bay's next series, Brady marched the Bucs (2-0) to the New Orleans 28 and then hit Perriman in the back right corner of the end zone to make it 10-3.

The Bucs' defense then squelched the Saints' comeback bid by intercepting Jameis Winston three times in the final 12 minutes. Jamel Dean made the first two picks — one on a deep pass intended for rookie Chris Olave at the goal line. Later, safety Mike Edwards returned an interception near the right sideline 68 yards for a touchdown to make it 20-3.

Winston, who had been limited in practice by a back injury, completed 25 of 40 passes for 236 yards and one late TD toss to Michael Thomas.

Tampa Bay didn't score until Ryan Succop hit a 47-yard field goal with 3:09 left in the third quarter to tie it 3-3.

The Saints (1-1) were threatening to retake the lead on the next possession, but safety Logan Ryan punched the ball free of running back Mark Ingram's grasp at the Buccaneers 10, and linebacker Carl Nassib recovered.

The Saints took the opening kickoff and quickly drove inside the Bucs' 20, only to stall and settle for Wil Lutz's 31-yard field goal.

That lead stood up throughout a first half in which Tampa Bay squandered two scoring chances. Brady's fumbled snap on third and short from the New Orleans 34 ended one drive.

The Bucs also failed on a fourth-and-1 from the New Orleans 8 when Carl Granderson stuffed Fournette's run.

Saints: Top running back Alvin Kamara was inactive because of his rib injury.