CINCINNATI - For the 73rd time, the U.S. Men’s National Soccer Team will face off Friday night against Mexico — renewing one of CONCACAF’s most fierce rivalries.

The two will meet in TQL Stadium at 9 p.m. ET as World Cup qualifying matches resume across the globe. Mexico sits atop the CONCACAF table with 14 points. Barring a blowout loss on Friday, that’s exactly where this squad will stay.

The Stars and Stripes are in second place with 11 points, besting the third-place Canadians by a point.

But considering how motivated Mexico will be to take a victory Friday night, a blowout loss to the Yanks is unlikely. Mexico lost two CONCACAF championships to the U.S. this summer.

Few things provide more encouragement than watching your rival hoist two trophies as you settle for second place. On top of that, Mexico has not beaten the Americans since 2019.

Another USMNT win would give the Yanks a third straight win over their southern neighbors, matching their longest-ever winning streak over Mexico.

And if that wasn’t enough motivation, there’s still the redemption arc. The U.S. failed to qualify for the last World Cup in 2018. But this 2021 squad has played in exceptional form for most of the year.

The Yanks have won 15 matches overall. And when qualifiers began in September, they trounced Honduras 4-1 and shut out Jamaica 2-0 the following month.

They’ve only lost twice this year and finished tied two times. But the poor performances during qualifiers summoned reminders of the disappointment faced in 2018. 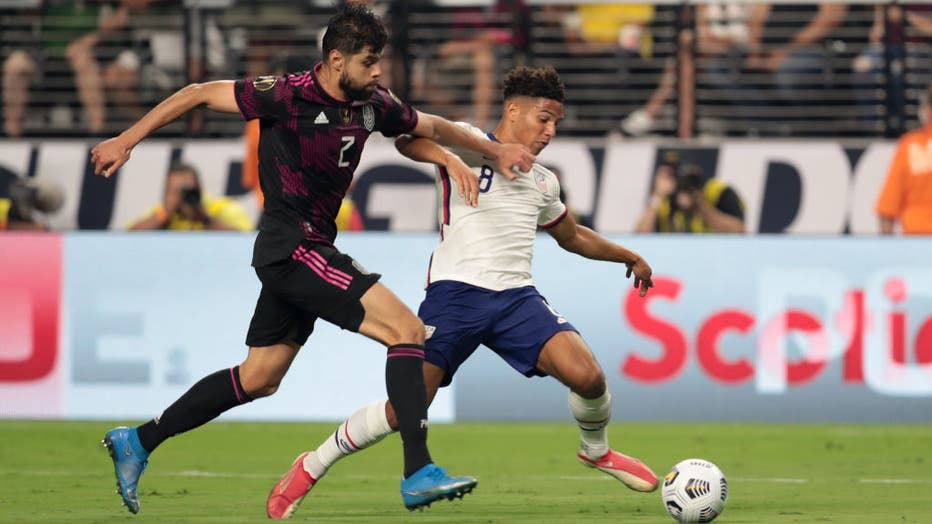 Nicholas Gioacchini, No. 8 of the United States is defended by Nestor Araujo, No. 2 of Mexico, during a game between Mexico and USMNT at Allegiant Stadium on Aug, 1, 2021, in Las Vegas, Nevada. (Photo by John Dorton/ISI Photos/Getty Images)

The uninspired offensive play resulted in an embarrassing 0-0 draw against El Salvador, a frustrating 1-1 tie against Canada and a humiliating 1-0 loss to Panama.

When qualifiers began, FIFA ranked the U.S. as the 10th best team in the world. That ranking has since dropped to 13th — meaning the Stars and Stripes should still be among the countries traveling to Qatar next December.

But they will have to keep pace with Mexico Friday, a squad that boasts a No. 9 ranking from FIFA — the highest in CONCACAF.