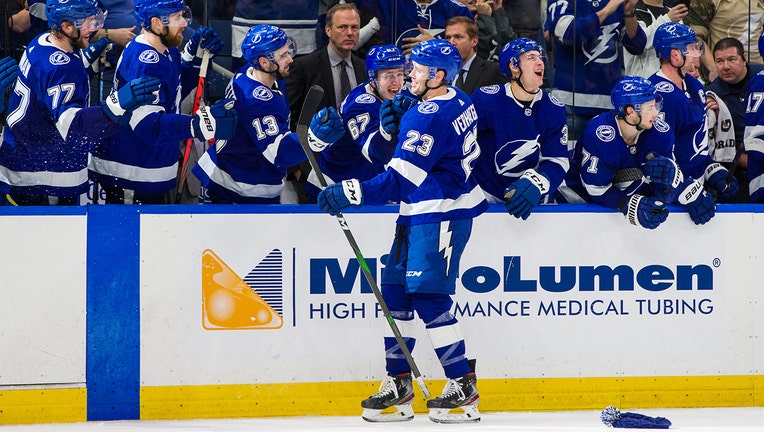 TAMPA, FL - JANUARY 7: Carter Verhaeghe celebrates his third goal and hat trick against the Vancouver Canucks during the third period at Amalie Arena. (Photo by Mark LoMoglio/NHLI via Getty Images)

TAMPA, Fla. - A matchup between the two hottest teams in the NHL turned into a mismatch in a hurry.

Rookie Carter Verhaeghe had his first career hat trick and Tampa Bay scored three times in less than a minute to finish a six-goal second period that propelled the Lightning to their season-best eighth straight win Tuesday night, a 9-2 victory over the Vancouver Canucks.

“That’s got to be the thrill of a lifetime," coach Jon Cooper said of Verhaeghe, who had his second multi-point game of the season. He’s kind of bounced around with us, different positions in the lineup. But it’s been leading up to this. He’s had some pretty good games. ... It was great to see."

Brayden Point had three assists during the stretch in which Tampa Bay built a 6-2 lead on Markstrom, who was pulled with just over two minutes left in the third after yielding six goals on 21 shots. Verhaeghe, Kucherov and Cernak scored within a span of 56 seconds to finish the Vancouver goalie‘s night.

“It's terrible," Markstrom said. “There's a reason you get pulled, because there's a big possibility we're not winning the hockey game. It's embarrassing personally. Mostly for the team, you feel like you let down your teammates.”

Point added his 18th goal of the season, assisted by Stamkos and Cernak, when he beat Markstrom’s replacement, Thatcher Demko, early in the third. Verhaeghe scored twice in the third period, getting his third of the game with an assist from Kucherov on a 5-on-3 power play with 1:51 remaining.

“It feels pretty good," said Verhaeghe, last season's American Hockey League scoring champion with the Syracuse Crunch. “All the guys were trying to get me the puck there, and (Kucherov) makes a great play. It was a great effort by the guys.”

Tampa Bay’s eight-game winning streak is its longest since the team won a franchise-record 10 straight last February. Andrei Vasilevskiy stopped 21 of 23 shots, with Vancouver’s Elias Pettersson giving the Canucks a 1-0 first-period lead and Loui Eriksson briefly making it 2-2 before the night went downhill in a hurry.

Verhaeghe no longer an unknown talent

Lightning center Carter Verhaeghe's road to the NHL has been well-traveled. At 24, he was the only rookie to make the opening night roster and admittedly he was a little star-struck walking into the Lightning's dressing room.&nbsp;

“I think our guys were excited to play. You could feel it on the bench when we made it 2-2. It's no secret, there was a little bit of magnitude with this game,” Canucks coach Travis Green said.

“All of a sudden, five minutes later it's 6-2 and you could really feel a real letdown from our group. I don't think we even recovered in the third period," Green added. “It's hard to come back against a team like that. It's a good challenge now to refocus."

Tuesday night’s matchup was just the second in NHL history featuring teams riding win streaks of seven or more games. In the other, the Columbus Blue Jackets and Minnesota Wild took streaks of 14 and 12 games, respectively, into a matchup Columbus won 4-2 on Dec. 31, 2016.

Vasilevskiy (20-9-2) has won a season-best six straight starts and leads the league with 11 victories since Dec. 1. He improved to 7-0-1 since last losing in regulation to Washington on Dec. 14.

“A 9-2 loss is never fun," Pettersson said. “We've got to have a short memory. Learn from it and not think about it too much.”

NOTES: Stamkos finished with two assists, along with his 17th goal on a second-period power play. The Lightning captain is tied with Doug Gilmour for 45th on the career power-play goal list with 153, one behind Hall of Famer Bobby Hull and Guy Lafleur. ... Brock Boeser assisted on Vancouver’s first goal. He has 16 points (three goals, 13 assists) in his last 16 games. ... Lightning D Ryan McDonagh missed his second straight game with an upper body injury. He likely will remain sidelined at least through Thursday’s home game against Arizona.