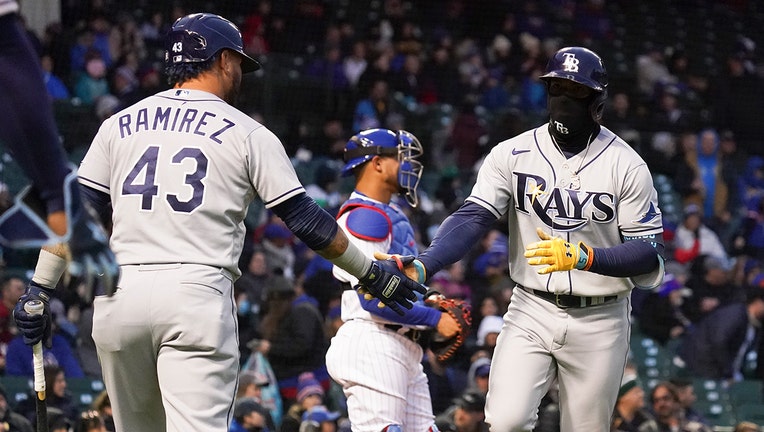 CHICAGO, ILLINOIS - APRIL 19: Wander Franco #5 of the Tampa Bay Rays is congratulated by Harold Ramirez #43 following Franco's two-run home run during the third inning against the Chicago Cubs at Wrigley Field on April 19, 2022 in Chicago, Illinois.

CHICAGO - Wander Franco hit his first homer of the season, a two-run drive to left-center in the third inning, and the Tampa Bay Rays held on to beat the Chicago Cubs 6-5 on Tuesday night.

Cubs rookie Seiya Suzuki drew three walks but his nine-game hitting streak came to an end, leaving him tied with Akinori Iwamura for the longest hitting streak by a Japanese-born player to start a career.

Playing at Wrigley Field for the first time, Franco finished 3-for-5, including the homer that put the Rays ahead 3-0. The second-year player missed Monday’s series opener with right quadriceps tightness.

"I’m very, very happy, obviously," Franco said through a translator. "I was ready to play since yesterday."

Franco’s three-hit game was his fourth of the young season.

"Right now, you just don’t see him getting fooled at all," manager Kevin Cash said. "He’s 21, unique, talented, special and we’re seeing all the parts of his game."

Opener Matt Wisler got the first five outs for the Rays and Josh Fleming (2-1) worked the next 3 1/3 innings, allowing three runs on four hits. Andrew Kittredge, the sixth Rays pitcher, retired the final six Chicago batters for his second save. He needed just 20 pitches to do it.

"He’ll pitch in any role and we needed him right then," Cash said. "He couldn’t have been more efficient."

Patrick Wisdom hit a two-run, pinch-hit homer in the fourth inning to get the Cubs within 4-3. Chicago had won two straight.

Manuel Margot had an RBI single in the second for the Rays, and Tampa Bay went ahead 6-3 in the seventh on run-scoring hits from Randy Arozarena and Harold Ramirez.

Nico Hoerner had an RBI triple in the seventh and scored on a wild pitch to get the Cubs within one run again.

Arozarena was a winner and loser when the umpires called for reviews. A replay showed he beat a throw to first to keep the third inning alive. Franco homered three pitches later.

Franco doubled in the fifth and Arozarena took off from first. He was thrown out at the plate, however, on a nifty relay by Nick Madrigal. The Rays claimed Cubs catcher Willson Contreras blocked the plate, but the review didn’t go their way.

Rays: LHP Ryan Yarbrough (left groin) threw off a mound Tuesday and Cash said he could make an appearance for Triple-A Durham as early as this weekend. Yarbrough (9-7 in 21 starts last season) has been on the 10-day injured list since April 11.