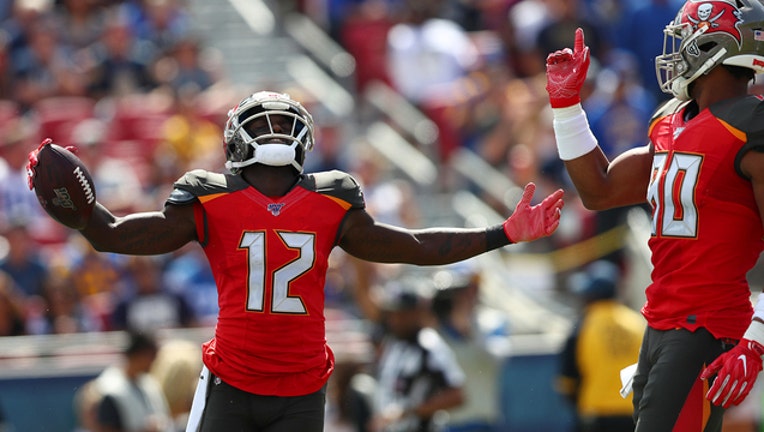 LOS ANGELES - Jameis Winston passed for 385 yards and threw two of his four touchdown passes to Chris Godwin, and Ndamukong Suh returned Jared Goff's fumble 37 yards for a touchdown with 1:06 to play in the Tampa Bay Buccaneers' 55-40 victory over the previously unbeaten Los Angeles Rams on Sunday.

Godwin had career highs of 12 catches for 172 yards as the Buccaneers (2-2) jumped to an early 21-0 lead and then scored 24 points in a wild fourth quarter to complete the highest-scoring game in the franchise's 44-year history.

Goff passed for a career-high 517 yards and two touchdowns, but the Rams' $134 million quarterback also threw three interceptions for the second time in his career. Goff then fumbled while being sacked by Shaquil Barrett as the Rams (3-1) attempted a tying drive, and Suh scooped and scored against the team with which he reached the Super Bowl last season.

Peyton Barber and Ronald Jones II rushed for TDs, and Cameron Brate also had a TD reception . Winston picked apart the Los Angeles secondary while going 28 of 41, and Godwin had the most catches by a Tampa Bay receiver since Keyshawn Johnson in 2001 - and it almost wasn't enough.

Tampa Bay went up 45-27 with 11:35 to play when Mike Evans burned Marcus Peters for a 67-yard TD capped by some goal-line showboating. But after Cooper Kupp caught a 29-yard TD pass, Peters returned an interception 32 yards for a touchdown with 8:11 to play.

Peters scored despite taking a helmet-to-helmet hit at the goal line from left tackle Donovan Smith that kept him out of the rest of the game under evaluation for a concussion.

Tampa Bay went back ahead by eight when Winston led a 72-yard drive capped by Matt Gay's short field goal with 2:35 left.

Goff got the Rams to midfield, but Barrett and Suh finished strong in Tampa Bay's first game in Los Angeles since 1993.

Robert Woods had 13 catches for 164 yards, and Kupp added nine catches for 121 yards. Goff went 45 of 68 while under regular pressure in a Rams offense that didn't look much like the relentless machine built by Sean McVay in his first two seasons in LA, despite its lofty statistics and final point total. Todd Gurley rushed for two touchdowns, but got only five carries for 16 yards in the Rams' nonexistent running game.

The Buccaneers opened a five-game stretch away from Tampa with compelling play on both sides of the ball, surprising just about everybody in the Coliseum who watched their loss to the Giants last week.

Winston found a groove immediately with his receivers, while the Rams' offense started off with another dose of its early-season inconsistency and curious play-calls . McVay called 13 passes and a receiver sweep before his first proper running play.

Jordan Whitehead picked off a tipped pass for Tampa Bay early in the second quarter, and Goff threw a terrible interception to Lavonte David moments later. Both turnovers resulted in TD catches by Godwin.

Facing their biggest deficit since Week 9 of last season against New Orleans, the Rams woke up for two quick TD drives, including a tackle-breaking TD run by Gurley . But Tampa Bay made another lengthy drive before halftime capped by a TD run by Jones , a collegiate star in the Coliseum for Southern California.

Goff threw his third interception on a tipped pass on fourth down in the third quarter.

Buccaneers: Evans injured his hand in the second half, but returned. ... WR Breshad Perriman didn't return from a hamstring injury in the first quarter.

Rams: LB Bryce Hager injured his shoulder during the first half. ... Rookie S Taylor Rapp left the field in the third quarter unable to put weight on his left ankle.

Buccaneers: Back on the road to face the New Orleans Saints on Sunday.

Rams: A quick trip to face the Seattle Seahawks on Thursday night in their first NFC West game of the year.