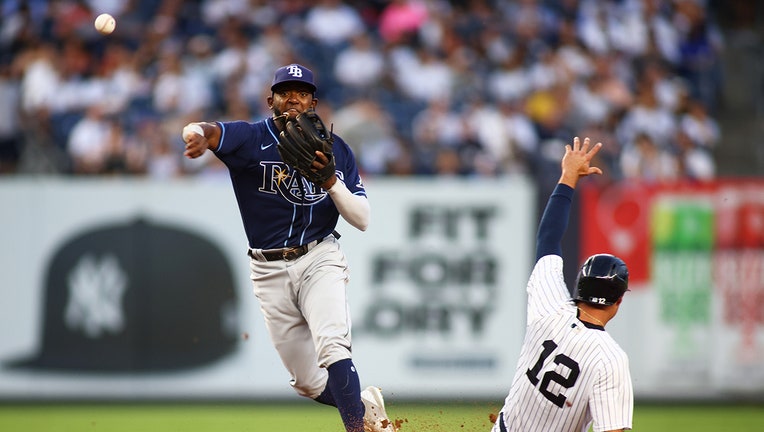 NEW YORK, NEW YORK - JUNE 15: Isiah Kiner-Falefa #12 of the New York Yankees is forced out as Vidal Brujan #7 of the Tampa Bay Rays completes the double play off the bat of DJ LeMahieu #26 at Yankee Stadium on June 15, 2022 in the Bronx borough of Ne

NEW YORK - Anthony Rizzo hit a solo home run with one out in the ninth inning and the streaking New York Yankees beat the Tampa Bay Rays 2-1 Thursday night for their 14th straight home win.

The Yankees have their longest home winning string since taking 15 in a row at the original Yankee Stadium on Aug. 16-Sept. 26, 1961, when Roger Maris was chasing Babe Ruth’s single-season home run record.

Rizzo’s 16th homer gave the Yankees their seventh straight win overall and eighth series sweep this year. New York became the sixth team since 1930 and the first since the 2001 Seattle Mariners to win at least 47 of its first 63 games.

Rizzo gave New York its eighth walk-off win of the season when he lifted a 2-1 sinker against Shawn Armstrong (0-1) into the right-center seats. Rizzo watched the ball soar into the seats, dropped his bat and was met with a wild celebration at home plate.

"Just a great at-bat by Anthony there," manager Aaron Boone said. "Getting into a good count and leaving some pitches that he should and then getting into one."

It was Rizzo’s fifth career game-ending homer and first since July 26, 2018, for the Chicago Cubs against Arizona. The Yankees have four walk-off wins since their last home loss on May 23.

Rizzo hit a tying single in the sixth after the Yankees were no-hit into the fifth. He hit his game-winner homer after nearly homering in the first when his flyball was caught at the warning track.

Francisco Mejía homered for Tampa Bay, which dropped to 2-5 in the season series with the Yankees. The Rays also lost for the 10th time in the last 16 meetings with New York and dropped to 1-5 on their nine-game trip.

"We’re frustrated, there’s no doubt losing three ballgames here especially with the way we pitched," Tampa Bay manager Kevin Cash said. "We really threw the ball really well. We’re going to get out of this. We’d like it sooner or later but we’d find a way to stay together through these tough times."

Michael King (4-1) struck out two and was aided by right fielder Marwin Gonzalez’s diving catch on Yandy Diaz’s liner in the ninth to set it up for Rizzo’s drive.

"Awesome, Clarke I couldn’t have drawn it up better," Boone said.

Severino was placed on the COVID-19 injured list and Schmidt found out he was making his third career start Thursday afternoon. After the game, Boone said Severino had tested negative and would accompany the team for a weekend series in Toronto.

"It’s hard to prepare for something like that," Schmidt said. "It’s kind of like I treat it like almost getting called from the bullpen and just coming into the game."

Jalen Beeks opened the game for Tampa Bay and pitched two perfect innings after originally scheduled starter Drew Rasmussen was placed on the injured list Wednesday because of a strained left hamstring. Matt Wisler went the next two innings.

The Yankees got their first hit when Aaron Hicks singled to right off Brooks Raley.

Rays: OF Kevin Kiermaier is day-to-day with a sore left calf and Achilles that started to bother him last week. … SS Wander Franco, on the IL since May 31 with a strained right quadriceps could be the DH in an FCL game Saturday. … C Mike Zunino, on the IL since Friday with left shoulder inflammation, will get a Botox shot in his neck. Cash said Zunino may have thoracic outlet syndrome but will not know for three to six days. … 1B Brandon Lowe, on the IL since May 16 with a stress reaction in his lower back, felt discomfort taking swings and will be shut down until Monday.