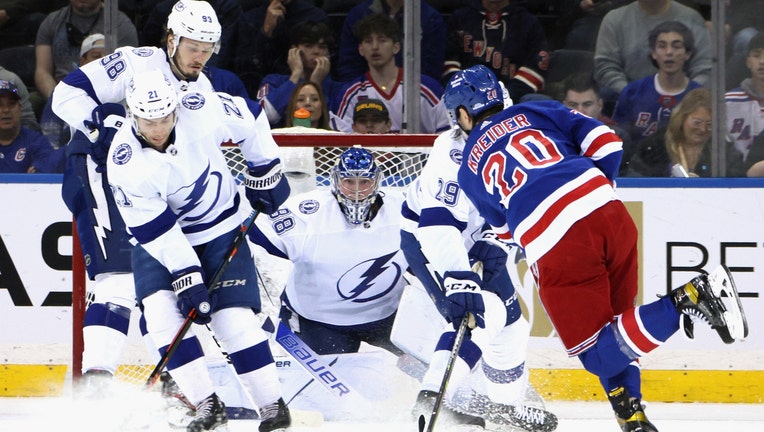 Ryan Strome also scored, Chris Kreider had three assists and Adam Fox added two to help New York win for the third time in five games (3-1-1). The Rangers beat the Lightning for the second time in three days after a 4-2 shootout victory at Tampa, Florida, on Friday night.

In this one, New York was without star forward Artemi Panarin, who was placed in COVID-19 protocols before the game.

Shesterkin had 18 saves in the first period, 11 in the second and nine in the third for his fourth career shutout. He improved to 15-4-2 with a 2.09 goals-against average this season.

Andrei Vasilevskiy, playing for the first time in 12 days after coming off COVID-19 protocols earlier in the day, had 17 saves as the Lightning lost their third straight (0-2-1) after winning nine of 10.

Zibanejad, who had the only goal of the shootout Friday, completed his hat trick late in the second period to put the Rangers up 4-0. He deflected Tampa Bay's outlet pass in its defensive zone and charged toward the net. The puck came to Kreider, who spun way to the left and sent a pass that Zibanejad deflected past Vasilevskiy with 3:07 remaining for his 11th of the season.

It was Zibanejad's his first hat trick since April 25 against Buffalo. He scored three goals three times last season, including a pair of three-goal, three-assist games.

The Lightning challenged for high-sticking on the play, but the goal stood after a review.

The Rangers came in eighth in the NHL on the power play at 23.9% and went 2 for 3 against the Lightning.

With Tampa Bay's Mikhail Sergachev off for hooking, Zibanejad got the Rangers on the scoreboard at 7:44 of the first as he got a pass from Fox and fired a rising shot from the top of the left circle past Vasilevskiy into the top left corner.

Nearly five minutes later, the Rangers were on a 4-on-3 power play when Zibanejad got his second of the night. He received a pass from Fox, skated back to his left and sent a pass toward Kaapo Kakko on the right side but the puck was deflected by Lightning defenseman Ryan McDonagh past Vasilevskiy with 7:23 left.

Strome made it 3-0 when he took a pass from Barclay Goodrow and fired a shot from between the circles over Vasilevskiy's glove for his seventh with 5:07 remaining in the opening period.

Shesterkin had six of his 18 saves of the first in the final minute, including a reaching glove stop on a slap shot by Sergachev in which the goalie ended up sprawled faced down in front of the goal with 16 seconds left, drawing chants of "I-gor! I-gor!" from the home crowd.

Sergachev went to the Lightning locker room just past midway through the second period with an apparent lower back/side injury. He was being tended to during a stoppage in play, but then left the bench. He missed the rest of the period but returned for the third.

In addition to Panarin, the Rangers were without D Patrik Nemeth due to an undisclosed illness. Rookie Zac Jones entered the lineup and made his season debut. ... G Alexandar Georgiev, removed from COVID-19 protocols one day earlier, was Shesterkin's backup. C Kevin Rooney, D Ryan Lindgren and D Jarred Tinordi remained in COVID-19 protocols.

Lightning: At Columbus on Tuesday night to wrap a two-game trip.

Rangers: Host Edmonton on Monday night before a five-game trip.