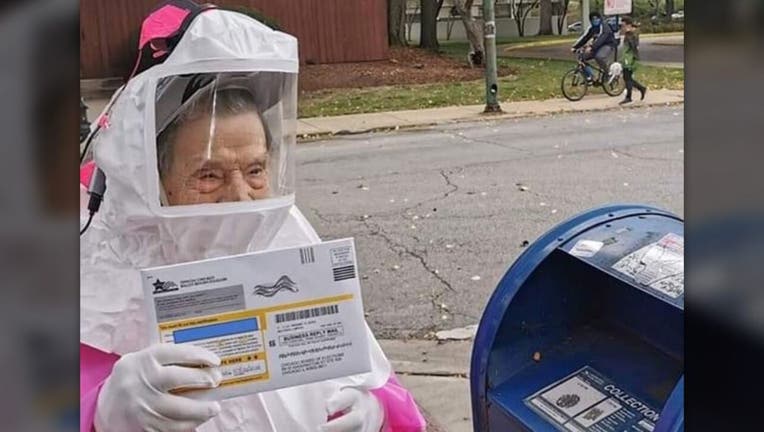 CHICAGO - 102-year-old Bea Lumpkin has voted in every election since 1940 -- and she wasn't about to let the coronavirus pandemic stop her from casting her ballot.

The retired teacher donned a hazmat suit to drop off her mail-in ballot last week.

The Chicago Teachers Union, which Lumpkin was a member of, tweeted, "If Bea can do it, anyone can do it. Vote!"

Lumpkin told the Washington Post her grandson designed the personal protective gear she wore to go out and vote in what she called the "most important election of my life."

“Being 102, my family insisted I take every precaution not to catch this COVID-19,” she told the outlet.

Lumpkin was born in 1918, the same year as the Spanish flu pandemic -- and two years before the passage and ratification of the 19th amendment that granted women the right to vote in the United States.

She said she cast her first ballot in 1940 for President Franklin Delano Roosevelt -- and has never missed a vote since.

"That's why I had my grandson take a photo of me, because if I could come out at the age of 102 and face a pandemic [to vote], nobody should have an excuse," she said in an interview with Good Morning America.

RELATED: Election 2020: Can voters fix an error on a mail-in ballot?

"Bea is truly universally beloved in our union, where she remains an active and dedicated retiree who shows up at as many picket lines and union events as she can, and remains very active in our work, plus writes occasionally for our monthly member publication, Chicago Union Teacher, most recently on the desperate need to address climate change," a spokesperson for the Chicago Teachers Union told Fox News.

The Chicago Teachers Union posted on Facebook in March 2019 about her protesting at the Chicago International Charter School headquarters at the spry age of 100.

Older voters turn out for elections more than any other age group. According to the U.S. Census Bureau, 71% of Americans 65 years or older voted in 2016, which is far more than the 46% of 18-to-29-year-olds who voted in the last presidential election.