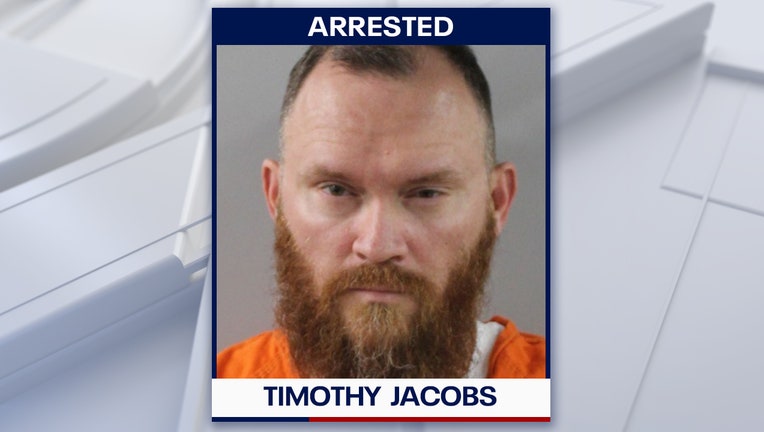 LAKELAND, Fla. - Deputies arrested a Lakeland man who they said posed as a teenage boy in order to obtain nude photos of an underage girl.

The Polk County Sheriff's Office said 47-year-old Timothy Jacobs first made contact with the 14-year-old victim on Snapchat in March 2020.

Investigators said when the two began chatting, Jacobs told the girl he was 17, and she replied that she was 14.

By the end of May of 2020, deputies said Jacobs started asking the victim for nude photos of herself, which she eventually provided. He then began sending her nude photos of himself as well.

On October 17, 2020, Jacobs drove to the victim's house and found the girl in the yard with her stepfather.

"As the stepfather shook Jacobs' hand, he realized that Jacobs was definitely not a teenager, and told the victim to go in the house," the sheriff's office said. That's when Jacobs got back into his vehicle and left.

The victim's mother began reviewing their cell phone bills and found that one particular phone number had been associated with her daughter's phone.

When she did an online search, the mother found that the phone number belonged to Timothy Jacobs. Further research turned up an address and the name of Jacobs' wife, who happened to be a friend of the victim's mother.

The mother then reached out to her friend and confirmed that the phone number belonged to Timothy Jacobs. Jacobs' wife also said that her husband obtained a new phone number earlier that day.

The victim's mother contacted the Polk County Sheriff's Office and reported everything she knew to detectives.

"The actions of this sick manipulator have not only caused a tremendous amount of grief for the victim’s family, but to his own family as well," Sheriff Grady Judd said in a statement. "These were textbook tactics used by predators to groom young victims. And this is another example of why parents need to monitor their child’s activities on social media, games, and cell phones."

Jacobs is charged with directing the sexual performance by a child, using a computer to seduce a child, use of a communication device to commit a felony, and transmitting material harmful to a minor, all of which are felony charges.