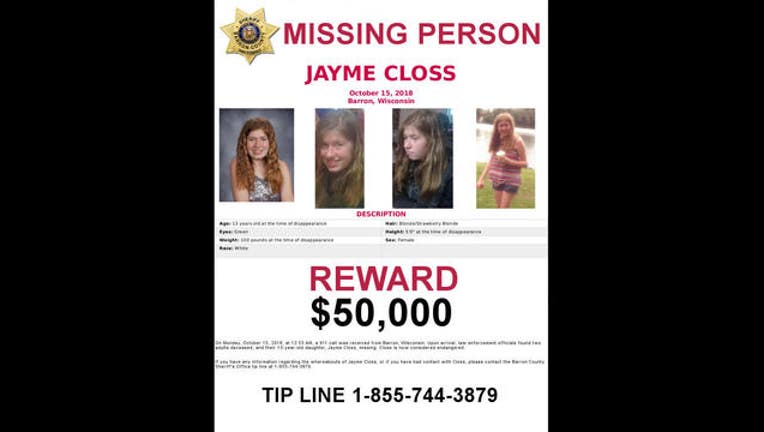 BARRON, Minn. (KMSP) - UPDATE: Saturday morning, the Barron County Sheriff's Office announced it had received more than 1,900 tips in the case, 1,700 of which have been closed.

"There is a tip out there that will break this case, keep them coming in," said Sheriff Chris Fitzgerald.

The reward to bring a missing Wisconsin teen home has doubled to $50,000, according to the Barron County Sheriff.

This comes just two days after investigators announced a $25,000 reward alongside members of Jayme's family. Sheriff Chris Fitzgerald says the Jennie-O Turkey Store worked with authorities to raise the amount of the reward. Jayme's parents, Denise and James, who were shot dead in the incident, both worked at Jennie-O. There will be a funeral service on Saturday for Denise and James.

Jayme went missing in the early morning hours of Oct. 15. Her parents were found dead in their Barron home. Authorities have identified two vehicles of interest in the case. Volunteers have participated in multiple searches for any possible evidence.

The sheriff’s office is continuing to ask anyone with information related to the case to call the tip line at 1-855-744-3879 or email jaymetips@co.barron.wi.us with any photos or videos of possible sightings.