TULSA, Okla. - Amid renewed fears of an overwhelming coronavirus resurgence, President Donald Trump plans to rally his supporters June 20 in Tulsa for the first time since most of the country was shuttered by the novel coronavirus, despite warnings from medical experts and local officials.

The rally marks the president’s first of the coronavirus era as the pandemic rages on.

Dr. Ashish Jha, director of Harvard’s Global Health Institute, called the upcoming Trump rally “an extraordinarily dangerous move for the people participating and the people who may know them and love them and see them afterward." Trump supporters coming from neighboring cities and states could carry the virus back home, Jha said. "I’d feel the same way if Joe Biden were holding a rally.”

Tulsa officials have also expressed grave disapproval of the event despite apparent excitement from Oklahoma Gov. Kevin Stitt, who encouraged the president on Monday to consider a larger outdoor venue to accommodate more attendees.

Dr. Bruce Dart, the executive director of the Tulsa Health Department, told the New York Times on Tuesday that the rally is “the perfect storm of potential over-the-top disease transmission.”

“It’s a perfect storm that we can’t afford to have,” Dart said. 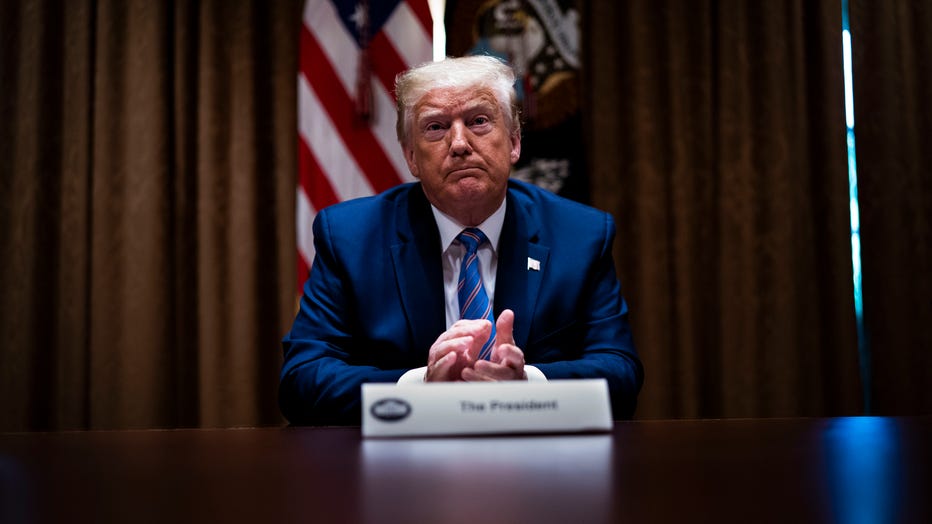 FILE - U.S. President Donald Trump listens during a round-table on “Fighting for America’s Seniors” at the Cabinet Room of the White House June 15, 2020 in Washington, D.C. (Photo by Doug Mills-Pool/Getty Images)

TROUBLE FROM THE START

Trump announced the rally in Tulsa as the kick-off of a tour to rev up his political base and show the nation's economy reopening after the long quarantine. Trump said in a tweet that almost 1 million people had requested tickets, although party officials haven't officially announced the total.

But G.T. Bynum, the first-term mayor of Tulsa, isn't celebrating Trump’s planned rally Saturday at the city’s 19,000-seat downtown BOK Center arena. While other Oklahoma GOP officials are hailing the event, Bynum finds himself in a precarious position, balancing partisan politics, the city's deep racial wounds and a COVID-19 infection rate that is suddenly spiking.

The rally comes as Tulsa's infection rate is rising steadily after remaining moderate for months. The four-day average number of new cases in the city has doubled from the previous peak in April. Dart has said he hopes the rally will be postponed, noting that large indoor gatherings are partially to blame for the recent spread of the virus.

There have been more than 8,900 confirmed positive cases of COVID-19 and 364 total deaths in Oklahoma as of June 17,2020 from the disease, more than half of which have been residents of nursing homes or long-term care facilities.

Besides concerns of the coronavirus, Trump’s decision to host the event in a city with its own troubled past has received glaring criticism from Tulsa’s African-American community.

Many leaders in the city's black community have lashed out at Trump's visit as provocative after the death of black Minneapolis resident George Floyd and mass protests around the world. Tulsa was the site of the nation's deadliest race massacre in 1921, when up to 300 black residents were killed by a white mob and the city's thriving Black Wall Street district was burned to the ground.

The Trump campaign initially planned to hold the rally on Friday, which is Juneteenth, a celebration of the end of slavery in the United States, but agreed to move the date to Saturday at the request of Stitt and others.

Despite the outcry, Trump has been eager to resume the rallies that are the centerpiece of his campaign. The president revels in his large crowds. The events let him vent and gauge the kind of rhetoric that will appeal to his ardent political base. They also help his campaign expand its voter databases and will serve as a contrast to Democratic challenger Biden, who has suspended campaign events because of the virus and hasn't attracted the same size of crowds.

But the decision to pull the trigger now was driven, in large part, by the mass anti-racism protests that have taken place across the country in the wake of George Floyd’s death in Minneapolis. Campaign and White House officials say the protests — and the limited public health outcry they generated — gave them cover. If it was OK for tens of thousands of people to march through the streets, demanding racial justice, why can't Trump rally his supporters, too?

Of course, the protests were held outside, with many participants wearing masks.

“Any large gathering, whether of protesters or ralliers, is dangerous,” Jha said. But infection is less likely at an outdoors moving march than at a crowded event in an enclosed space, he said, citing the air flow.

President Donald Trump has long been fond of crafting his own version of the facts surrounding the coronavirus. Speaking at an event on police reform in the Rose Garden of the White House, Trump suggested this week that “if we stop testing right now” for the coronavirus “we’d have very few cases.”

It’s a push that public health experts and Democratic officials worry is sending a dangerous message to the American public and comes as some parts of the country have seen a surge in cases in recent weeks.

While Trump has repeatedly downplayed the seriousness of the deadly virus that has now killed over 117,000 Americans as of June 17, the sign-up page for guests to register for tickets to the Tulsa rally contains a disclaimer stating attendees “voluntarily assume all risks related to exposure to COVID-19” and agree to not hold Trump’s campaign, the venue or any affiliates liable for any illness or injury.

“By attending the Rally, you and any guests voluntarily assume all risks related to exposure to COVID-19 and agree not to hold Donald J. Trump for President, Inc.; BOK Center; ASM Global; or any of their affiliates, directors, officers, employees, agents, contractors, or volunteers liable for any illness or injury,” the notice states.

The campaign picked Tulsa's BOK Center, with a listed seat capacity of 19,199. The arena's Facebook page shows organizers calling off shows there by country singer Alan Jackson and other performers into mid-July, citing the coronavirus pandemic.

Arena marketing director Meghan Blood said Thursday she didn't know yet about any plans for social distancing or other coronavirus precautions for Trump's rally, which would be one of the larger public gatherings in the U.S. at this stage of the outbreak.

Campaign officials said safety decisions would be made in coordination with local authorities.

WHAT MAKES THE RALLY HIGH RISK?

Trump’s rally will be held indoors, at a 19,000-seat arena that has canceled all other events through the end of July. Scientists believe the novel coronavirus spreads far more easily in crowded enclosed spaces than it does outdoors, where circulating air has a better chance of dispersing virus particles.

The U.S. Centers for Disease Control and Prevention outlines the highest risk events for transmission of the coronavirus this way: “Large in-person gatherings where it is difficult for individuals to remain spaced at least 6 feet apart and attendees travel from outside the local area.” The CDC recommends cloth masks in places where people might shout or chant.

Trump’s rallies typically draw tens of thousands of supporters. They usually stand outside in line for hours before passing through airport-style security and cramming into an arena, where they sit side by side or stand shoulder to shoulder. The rallies are typically raucous, with shouting, cheering and chanting. Some people dance and jeer at reporters. Sometimes protesters are met with violence before they are removed by security.

Many attendees are older, which would put them at higher risk of severe complications from COVID-19. It’s not unusual for several individuals in the crowd to require medical attention when the temperature rises.

The rallies also typically draw supporters from surrounding towns and states. Some die-hard fans travel across the country from rally to rally.

WHAT PRECAUTIONS ARE BEING TAKEN?

In a statement to the New York Times, a spokesperson for Trump’s campaign said that body temperatures would be taken at the rally and masks and hand sanitizer would be distributed among attendees.

“The campaign takes the health and safety of rallygoers seriously and is taking precautions to make the rally safe,” said the spokesperson.

Trump has made clear that he believes empty seats are bad optics. “I can’t imagine a rally where you have every fourth seat full. Every — every six seats are empty for every one that you have full. That wouldn’t look too good,” he said in April.

Trump also insisted that the marquee event of the Republican National Convention — his acceptance of his party's nomination for reelection — be moved from Charlotte, North Carolina, to Jacksonville, Florida, after North Carolina's Democratic governor refused to promise he would not impose crowd restrictions.

“As far as the virus is concerned, we have two choices: we can allow it to dominate us, or we can learn as much as we can about it and we can learn how to live with it in a safe, prescribed manner,” he said on “Fox News Sunday.” “And I think the second option is the one that’s going to be adopted.”