A Florida college student was shot and killed on Sunday in Alabama trying to protect himself and his girlfriend after they were apparently tricked and held at gunpoint by a woman who claimed she was having trouble with her car, according to the Clay County (Alabama) Sheriff's Office.

CLAY COUNTY, Al. - A Florida college student was shot and killed on Sunday in Alabama trying to protect himself and his girlfriend after they were apparently tricked and held at gunpoint by a woman who claimed she was having trouble with her car, according to the Clay County (Alabama) Sheriff's Office.

In an updated news release late Tuesday, the Clay County Sheriff's Office said Adam Simjee and his girlfriend, Mikayla Paulus, who are both from Apopka, Florida, and students at the University of Central Florida, were driving along a road when they were "flagged down" by a woman, later identified as Yasmine Hider, who "asked the couple if they could give her some assistance to help get her car started."

"When the couple attempted to assist Hider, she produced a gun and made the couple walk back into the woods," the news release said. While in the woods, Simjee pulled out a gun and "there was an exchange of gunfire."

Simjee was shot and killed, authorities said. Hider, the suspect, was shot multiple times and taken to the hospital. Simjee's girlfriend was not injured.

The Sheriff's Office said at some point after the shooting, the man's girlfriend noticed there was another woman "standing in the woods nearby observing what was going on." That woman was later identified as Krystal Diane Pinkins.

Deputies said Hider asked the woman for help, but she ran away. It was at this point that Mikayla was able to get her cell phone and call 911. When first responders arrived at the scene, they found Mikayla performing CPR on her boyfriend, the release said. 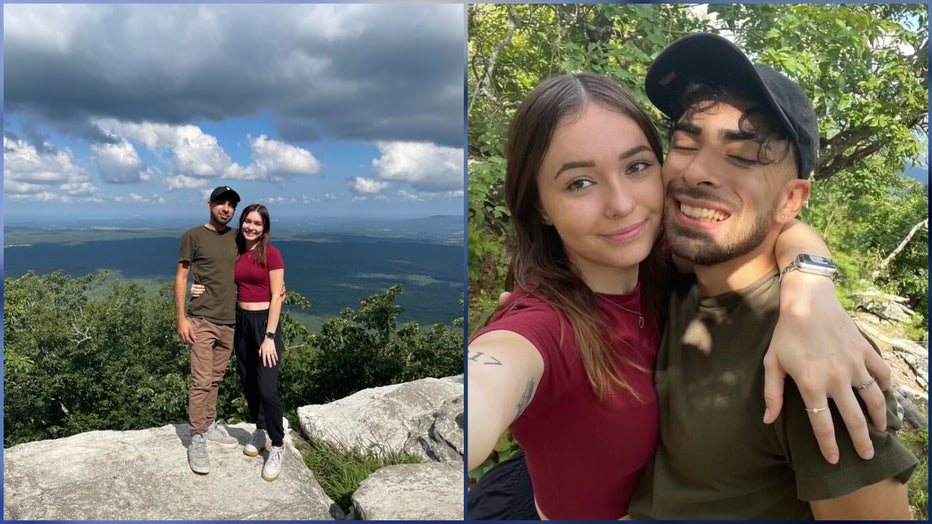 Mikayla Paulus, the girlfriend of Adam Simjee, said these photos of them were taken about an hour before the two were held at gunpoint in a deadly attempted armed robbery.

Off-camera, Mikayla told FOX 35 that Hider began asking for their bank account numbers shortly after they stopped to help her. She said Hider reportedly shot her boyfriend in the stomach, and that he shot her in the leg.

She described her boyfriend as a "hero" who stopped the woman from hurting her at the cost of his own life.

The Clay County Sheriff's Office said through its investigation, it received information that there may be a group of people who were "living off the grid" nearby in the Talladega National Forest, and described the group as "armed and potentially violent."

Deputies and a dog tracking team found a "base camp" and a large group of tents about a half-mile from where the couple was robbed, according to the news release.