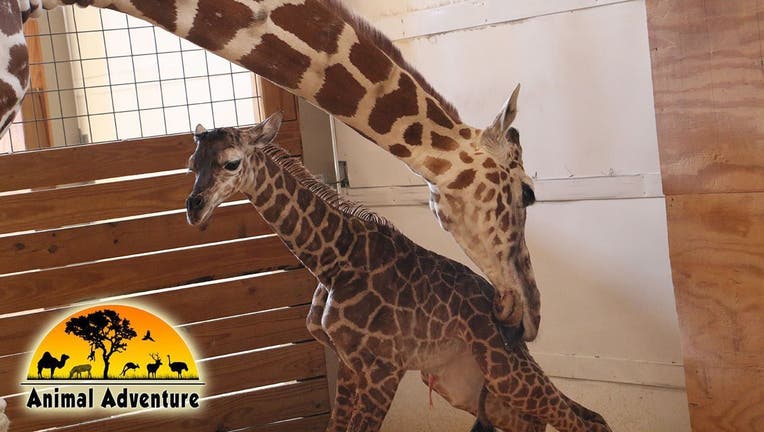 April and Tajiri, as seen in this Animal Adventure Park photo from 2017.

HARPURSVILLE, N.Y. - April, the giraffe whose live-streamed pregnancy captivated the internet in 2017, has died at the age of 20.

Officials at her zoological park in New York confirmed the news in a Facebook post Friday afternoon.

"It is with the heaviest of hearts that Animal Adventure Park announces the tremendous loss of our beloved April the Giraffe," the post stated. "Euthanasia was carried out at April’s home in Harpursville this morning, due to her worsening arthritis, in accordance with the recommendations of her veterinary team."

When keepers at Animal Adventure Park installed a live streaming camera from her pen, it did not take long for her to gain fame around the world. As the months ticked by, she developed a large following of fans who became familiar with her daily routine, her mate Oliver, and even her keepers.

More than a million people have watched as April the giraffe and her mate Oliver prepared to become a family of three at Animal Adventure Park, and at 9:53 a.m. the baby finally made its debut.

By the time she finally gave birth to a baby boy, Tajiri, the live stream had accumulated hundreds of millions of views. The park ended the feed a few weeks later.

After giving birth in front of an audience of millions, April the giraffe now has some privacy.  Animal Adventure Park turned off their live streaming ‘giraffe-cam’ Friday afternoon, ending a 70-day run as a top internet sensation.

April continued to live at the park, giving birth to another baby boy who later died at a Texas zoo.

According to the park, April began showing signs of arthritis last summer. By March, her condition had worsened to the point where the veterinary team had to make a decision painfully familiar to millions of pet owners around the world.

Park officials said April was in her "golden years," with the life expectancy for captive giraffes averaging 20 to 25 years, compared to the average lifespan of 10 to 15 years in the wild.

"While her hoofprints in her yard will erode in time, the imprint she has made on the hearts of people around the world will never fade," the park's post continued.

Cornell University Veterinary School veterinarians will conduct a necropsy, them April will be cremated and her ashes returned to Animal Adventure Park.

"We appreciate respect and empathy from April’s fans and the park’s supporters during this difficult time, as they grieve along with us," park owner Jordan Patch offered. "She will be deeply missed and fondly remembered."