Those left behind after Hurricane Ian leveled Fort Myers Beach are coming together to support each other.

FORT MYERS BEACH, Fla. - Officials in Lee County, Florida, are warning that not all post-Hurricane Ian looters may get off as lucky as the jailed accused scavengers arrested earlier this week — some of whom are in the U.S. illegally.

Omar Mejia Ortiz, 33, and Valerie Celeste Salcedo Mena, 26, were arrested, along with 20-year-olds Brandon Mauricio Araya and Steve Eduardo Sanchez Araya. Lee County sheriff's deputies arrested all four on charges of burglary of an unoccupied structure during a state of emergency, according to online jail records.

Lee County Sheriff Carmine Marceno held a press conference Tuesday in which he addressed the spike in looting and illegal scavenging in the aftermath of the historic hurricane.

Marceno announced that three of the four looters are illegally in the US, saying, "All three of these subjects are here illegally in this country — Robert Mena, Brandon Araya, Stephen Araya — all arrested for stealing bottles on Fort Myers Beach during the hurricane. They were located and arrested. And I'm going to tell I'm not tolerating it again." 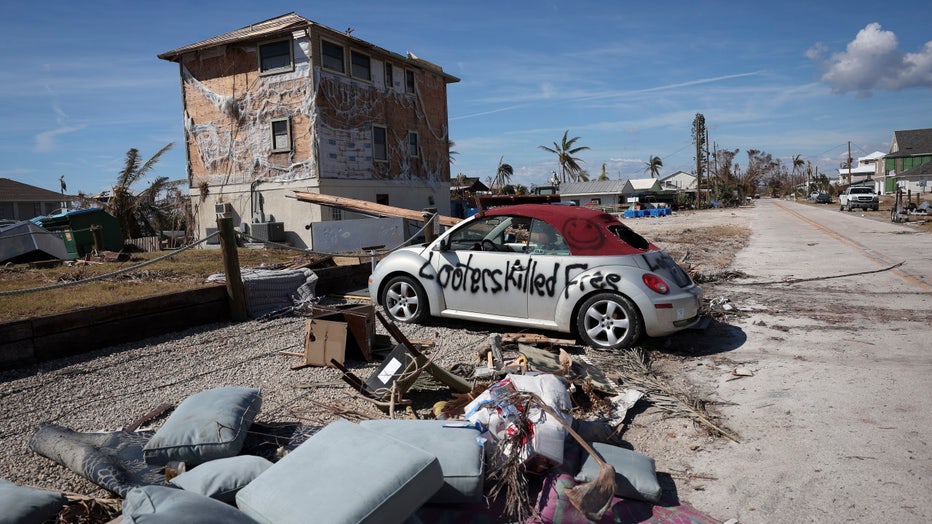 A warning to looters is painted on the side of a car destroyed during Hurricane Ian on October 03, 2022 in Pine Island, Florida. Southwest Florida sustained severe damage during the Category 4 hurricane which caused extensive damage to communities al

Florida sheriff's deputies arrested the four suspected burglars who allegedly looted in the wake of Hurricane Ian, while many impacted Floridians struggle to recover from the Category 4 storm.

Marceno warned the public not all looters will get away with their lives.

"I'm not playing. We're not playing. We have law and order and great residents will be safe and secure. We've had arrests on these incidents," Marceno continued. "You might walk in. You'll be carried out."

It is unclear exactly when and where the burglaries took place.