Republicans in the House blocked a resolution calling on Vice President Mike Pence to invoke 25th Amendment and remove Trump from office.

LOS ANGELES - A growing number of major companies are halting political donations made to some Republican lawmakers after last week’s insurrection on the U.S. Capitol by pro-Trump rioters that left five dead, including a Capitol Police officer.

Other companies, including Airbnb, FedEx and Ford Motor Company, have issued statements condemning the deadly attack and to say they are reevaluating political spending.

"Airbnb strongly condemns last week’s attack on the US Capitol and the efforts to undermine our democratic process. We will continue to uphold our community policies by banning violent hate group members when we learn of such memberships, and the Airbnb PAC will update its framework and withhold support from those who voted against the certification of the presidential election results."

American Express and JPMorgan Chase have said they would no longer donate to candidates who supported last week's insurrection or did not vote to confirm President-elect Joe Biden's victory in the Electoral College. Goldman Sachs is also holding back on political donations, a source at the firm familiar with the matter said who is not authorized to speak publicly on the matter.

In response to the violent pro-Trump insurrection that occurred last week, AT&T announced on Monday that it will "suspend contributions to members of Congress who voted to object the certification of Electoral College votes last week."

AT&T’s CEO, John Stankey condemned the Capitol riots and those who tried to prevent the certification of President-elect Joe Biden’s 2020 election victory.

A spokesperson for Best Buy wrote in a statement that the company has "made the decision to stop providing campaign contributions to the 147 members of Congress who voted in objection to certifying the presidential election results."

Boeing released a statement on Wednesday condemning the violence that occurred at the U.S. Capitol on Jan. 6., saying that it is not making any political contributions "at this time."

"We will continue to carefully evaluate future contributions to ensure that we support those who not only support our company, but also uphold our country’s most fundamental principles," the company said (https://boeing.mediaroom.com/news-releases-statements?item=130806).

According to a Tweet from the bp America account, "The bp employee political action committee will pause all contributions for six months. During this time the PAC will reevaluate its criteria for candidate support."

"Cisco has halted contributions to all of the 147 representatives and senators who attempted to prevent Congress from fulfilling its constitutional duty to certify a legitimate and fair presidential election," the company wrote on Twitter.

In a statement obtained by Reuters, a Comcast spokesperson wrote that the company will "suspend all of our political contributions to those elected officials who voted against certification of the electoral college votes, which will give us the opportunity to review our political giving policies and practices."

Dow Chemical  Company wrote in a statement that it is "immediately suspending all corporate and employee political action committee (PAC) contributions to any member of Congress who voted to object to the certification of the presidential election."

"This suspension will remain in place for a period of one election cycle (two years for House members; up to six years for Senators), which specifically includes contributions to the candidate’s reelection committee and their affiliated PACs. Dow is committed to the principles of democracy and the peaceful transfer of power. Our values – integrity, respect for people, and protecting our planet – are the foundation on which we stand and our values guide our political contributions," the company added. 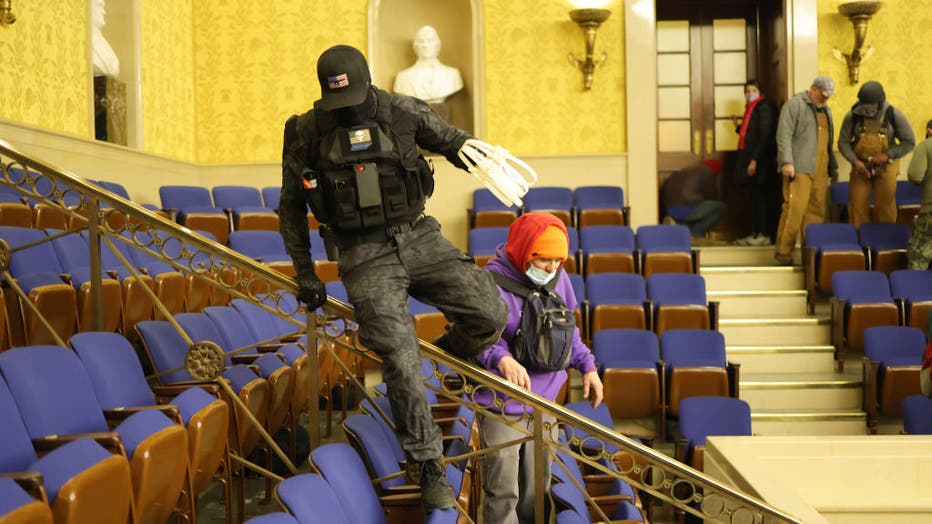 The financial services firm announced on Twitter that it’s pausing political contributions made to "all elected officials."

"The Edward Jones PAC has a long history of bi-partisan advocacy & we want to ensure that any elected officials we support share the values and views of the firm," the company tweeted.

Facebook also said it would suspend all political donations through the first quarter at least, while it reviews its policies, a company spokesperson told FOX Business.

Twitter suspended Trump from its platform, as did Facebook, last week, citing repeated policy violations an ongoing risk of incitement of violence in the wake of the pro-Trump riot inside the U.S. Capitol.

FedEx, whose PAC donated $10,000 to Kansas Sen. Roger Marshall, $1,000 to Texas Republican Sen. Ted Cruz, $2,500 to Republican Sen. Cynthia Lummis from Wyoming, and $2,000 to Republican Sen. Josh Hawley of Missouri, told FOX Business that "multiple factors impact its decisions to support candidates" and that it will review "all future political contributions."

"We condemn the violence that occurred in Washington, D.C., and fully support the results of the U.S. general election," a spokesperson for FedEx added. "We congratulate and look forward to working with the Biden administration on policy issues important to our company and our customers."

Hawley is currently facing calls for resignation after his continued rejection of Biden’s election victory  — even after the Capitol riot.

The automaker condemned the violent actions at the Capitol, which it said "contradict the ideals of a free and fair election and a peaceful transition of power."

"As we have said, events over the past year have underscored the need for a broader, ongoing discussion about other relevant considerations when it comes to our employee PAC. In order to give these important discussions the time and reflection they deserve, the Ford PAC will be suspending new contributions for now," Ford wrote in a statement to FOX Television Stations.

Reuters reported on Monday that Google is pausing donations from its political action committee in response to the violent pro- Trump protests that left five dead, including one Capitol police officer.

"The recent actions of Senators Josh Hawley and Roger Marshall do not reflect our company’s values," the company wrote in a statement obtained by Reuters.

Shopify, an e-commerce platform for merchants to sell goods, shut down the Trump campaign's merchandise website.

The financial technology company Stripe has stopped processing payments for the Trump campaign, according to a person familiar with the matter who requested anonymity because the decision hasn't been made public.

The move will cut off Trump's fundraising arm from what has been a steady stream of small-dollar donations that are often solicited through emails and text messages. Stripe's decision was first reported by The Wall Street Journal on Sunday, Jan 10.

In the days after the election, Trump's campaign raised tens of millions of dollars, promising to use the money toward fighting the results of the election. That money largely appears to have gone into Trump's broader political action committee.

In a statement to FOX TV Stations, Walmart says its political action committee "is indefinitely suspending contributions to those members of Congress who voted against the lawful certification of state electoral college votes."

Reuters reported on Tuesday that Wells Fargo & Co said its political action committee (PAC) will pause all political contributions for the foreseeable future.

"We will take into consideration the actions of elected officials who objected to the Electoral College vote and we urge members of all political parties to work together in a bipartisan fashion to help our nation heal", a spokesperson said in an emailed statement.

The company said it is taking the time to reevaluate its contribution strategy at the beginning of Biden’s administration.

The Associated Press and FOX Business contributed to this story.