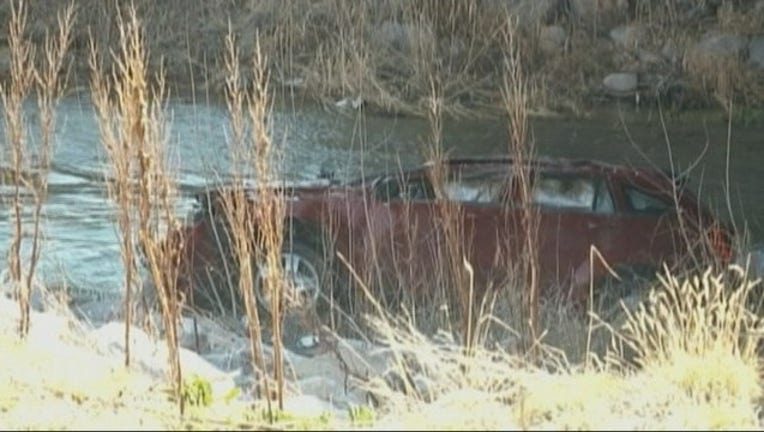 A baby survived a car crash in a frigid Utah river after being strapped in a car seat upside-down for about 14 hours before being found by a fisherman, officers said.

The 18-month-old girl's condition was upgraded from critical to stable but critical condition at a Salt Lake City hospital, but her 25-year-old mother, Lynn Groesbeck of Springville, was found dead in the car, police said Sunday.

The fisherman discovered the car on its top about 12:30 p.m. Saturday in the Spanish Fork River in Spanish Fork, about 50 miles south of Salt Lake City, police Lt. Matt Johnson said.

Investigators believe the wreck occurred about 10:30 p.m. Friday when a resident near the accident scene reported hearing something, Johnson said. The resident was unable to find anything out of the ordinary when checking the area near Provo.

The infant was found hanging upside down above the river that flowed through the car, and the water never reached high enough to touch her, Johnson told the Deseret News newspaper. Her mother was found in the driver's seat.

The car struck a cement barrier on the bridge and careened into the river, investigators said. Police are unsure why the car left the roadway, and the Utah Highway Patrol is assisting in the accident investigation.

Family members told police that Groesbeck left a nearby home in Salem about 10 a.m. Friday and was en route to her Springville home near Provo when the crash occurred. Family spokeswoman Jill Sanderson did not immediately answer phone calls for comment Sunday.

Three police officers and four firefighters who entered the river were released after treatment for hypothermia at a hospital.

Police said they wouldn't release further details Sunday unless the baby's condition changes. The baby's name was not released.