What is salmonella infection and what are the symptoms?

People can get infected by eating contaminated food or drinking water, as well as by touching infected animals or their environment.

Bearded dragons have been linked to a multi-state salmonella outbreak, according to the U.S. Centers for Disease Control and Prevention — which issued a warning this week for owners of the popular pet lizard.

"Bearded dragons can carry Salmonella germs in their droppings even if they look healthy and clean," the CDC said in a notice posted on Tuesday. "These germs can easily spread to their bodies and anything in the area where they live and roam."

A total of 44 people have been infected with the strain of Salmonella Uganda across 25 U.S. states, the agency said. Among them, 15 were hospitalized but there have been no reported deaths.‘

Illnesses tied to the outbreak were first reported on Dec. 24, 2020, and continued through at least Dec. 2, 2021, CDC data shows. The U.S. states with the most reported illnesses were Wisconsin and Washington state, though a range of states nationwide was listed as part of the outbreak.

The agency said the figures are likely an undercount because many recover without treatment and are not tested for Salmonella infection.

The CDC warned that pet owners can become ill from touching their bearded dragon or anything in its environment, and then touching their mouth and swallowing Salmonella germs. Out of 33 people interviewed so far, the agency said 21 patients (64%) reported owning or touching bearded dragons or their supplies.

People reported getting their bearded dragons from various places, including pet stores and online. 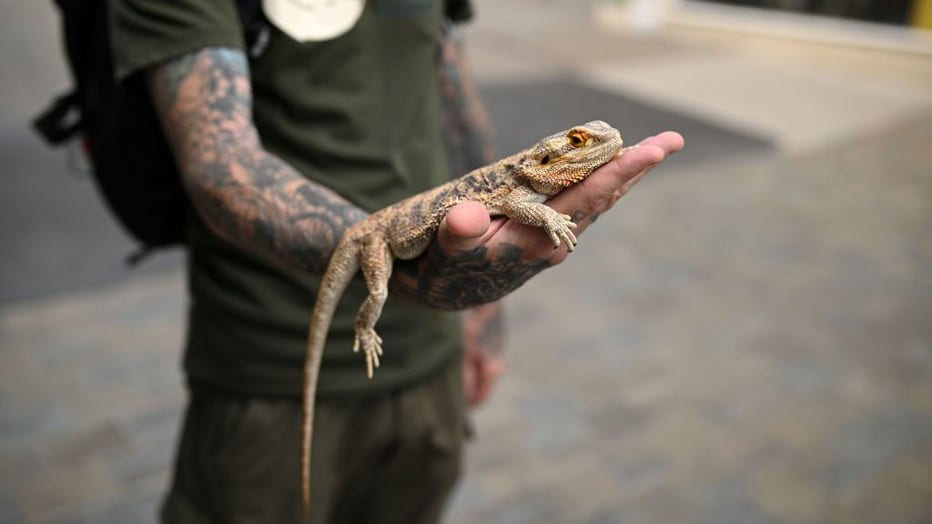 FILE - A man holds his pet bearded dragon in a file image taken on June 1, 2020. (Photo by OLI SCARFF/AFP via Getty Images)

Public health officials strongly advised that pet owners wash their hands, don’t kiss or snuggle the bearded dragon, don’t eat or drink around it, keep the animal out of the kitchen and ensure that its supplies and habitat are clean.

Some people, particularly children younger than 5, adults 65 and older, and people with weakened immune systems, may experience more severe illnesses that require medical treatment or hospitalization. The CDC said bearded dragons are not recommended for these groups as pets.

"These people are more likely to get a serious illness from germs that reptiles can carry," the notice said.

The CDC is also following a separate Salmonella outbreak linked to onions. This outbreak has been reported across 38 states and Puerto Rico, with 892 reported illnesses and 183 hospitalizations. Multiple companies have recalled onions supplied by ProSource Produce LLC and Keeler Family Farms and imported from the state of Chihuahua, Mexico, between July 1 and Aug. 31, 2021.