Florida was one of three states that had not been releasing COVID-19 hospital data by county. It started releasing the data on Friday, so we still need a few more days to start seeing the trends, but we already have a much better idea of what our hospitals are dealing with.

TAMPA, Fla. - Florida reported more than 12,000 new cases of COVID-19 in the latest daily report, and that followed the 15,000 cases on Sunday that broke the national record for a one-day total. But there are some encouraging trends in the data that suggest the state could be bending the curve.

While Sunday’s number of new cases was a record, so was the number of people tested -- over 144,000. A jump in lab results contributed to that attention-getting stat.

One key number to watch is the rate of positive tests for people who had never tested positive before.  That gives you a better sense of the pace of community transmission.

Last Wednesday, the positivity rate of new cases rose to 18%.  That’s nearly one in five testing for COVID for the first time, and testing positive.

That’s the high watermark so far for Florida. The positivity rate had been in the 14% range the first week of July.

But since that peak last Wednesday, the rate has been dropping down to 11%, and then down to 11.2%.  That’s the same day the state had that national record-breaking 15,300 new cases. 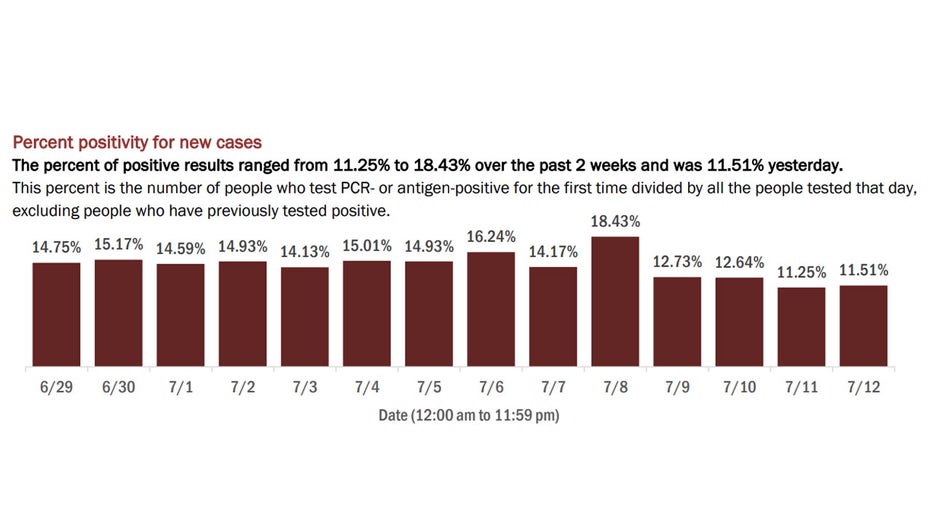 Monday’s report, which is always a day behind, showed the positivity rate on Sunday ticked back up a little to 11.5%. We don’t yet know if that’s just noise in the data or an indicator that the rate will continue to rise again. But so far, the declining positive test rates for new cases suggest we may be flattening curve despite the rising numbers of confirmed new cases.

Dr. Jay Wolfson with USF Health said the test results lag behind by several weeks. As more people get tested, the Tampa Bay area is recording some fluctuating positivity rates, including some two-week lows as of Monday. But public health experts like Dr. Wolfson said they hesitate to say it’s going down.

“It’s in this fluctuation period. It’s plateauing at a much higher rate by the way than it did before,” said Wolfson. “I think it could be misleading if we tell people that the rates are going down because they’re still way above what any of us expect it to be and it can shoot up again very quickly.”

Meanwhile, though, we’re seeing a rise in the median age of people testing positive. This indicates coronavirus is now spreading from mostly young adults into older and more vulnerable age groups, and that could explain the rising number of hospital admissions.

“Every week we’re seeing an escalation of the number of people who are presenting with COVID,” explained Dr. Jason Wilson of Tampa General Hospital. “We’re seeing different types of people now. First we saw this big spike in young patients, then we saw what we knew would come after that a couple of weeks later -- sicker, older folks.” 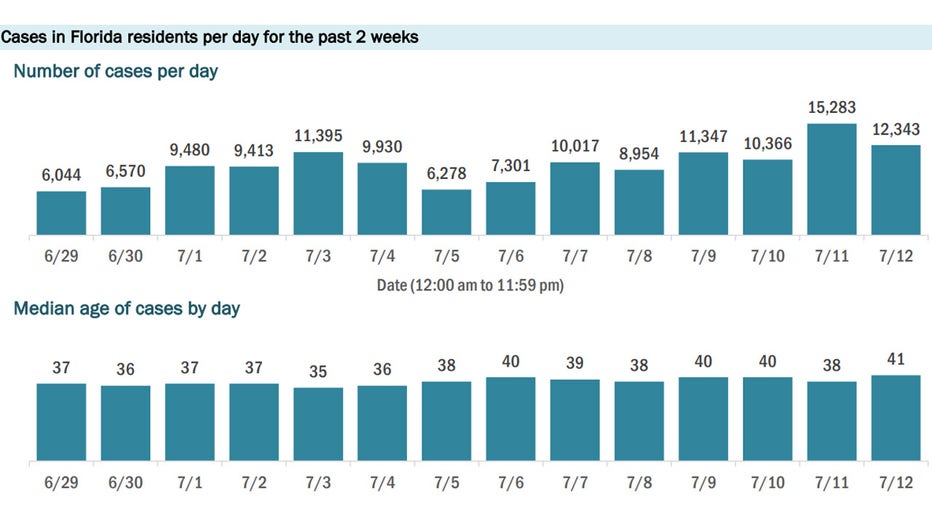