SEFFNER, Fla. - For years, you could count on the voice of the Hawks at football games in Seffner: Mr. Bruce Burnham, a former Armwood High School teacher and coach. He called the games until his retirement.

Burnham died Saturday after battling cancer. Now he's being remembered for his life of sacrifice, service, and spirit in the community.

He was a veteran of the Vietnam War and then a social studies teacher at Armwood High School starting in 1985, not long after the school was built.

He was also the P.A. announcer at games and greeted the crowd with handshakes, earning him the nickname 'Mayor of Armwood.'

“If you were headed Seffner for a football game, you were going to hear the voice of the Hawks, Mr. Burnham,” said Tony Pirotta, a former Armwood teacher, who first met Bruce Burnham at a 2007 staff meeting. “And if he could help you he was sure going to do everything he could do to help.”

With his wife, Pam, Mr. Burnham was an avid Rays fan. They wore Rays jerseys to home and away games, but it was his Army uniform that could help explain the effect he had on students.

“They grew up because they took his class,” said former student Adam Chambers. “Because he exposed you to all aspects of war.”

He taught an elective class called History of the Vietnam War and he brought it alive with first-hand knowledge.

“Because it wasn’t just us reading in a textbook,” said former student Caitlen Edwards. “It was us getting something that was more tangible and more real, right in front of us.”

Edwards says the class included the music of the era and differing opinions on a divisive war.

“In today’s world we live in, where there’s all the divisiveness, we can learn something from a Bruce Burnham where you can agree to disagree,” said Chambers. 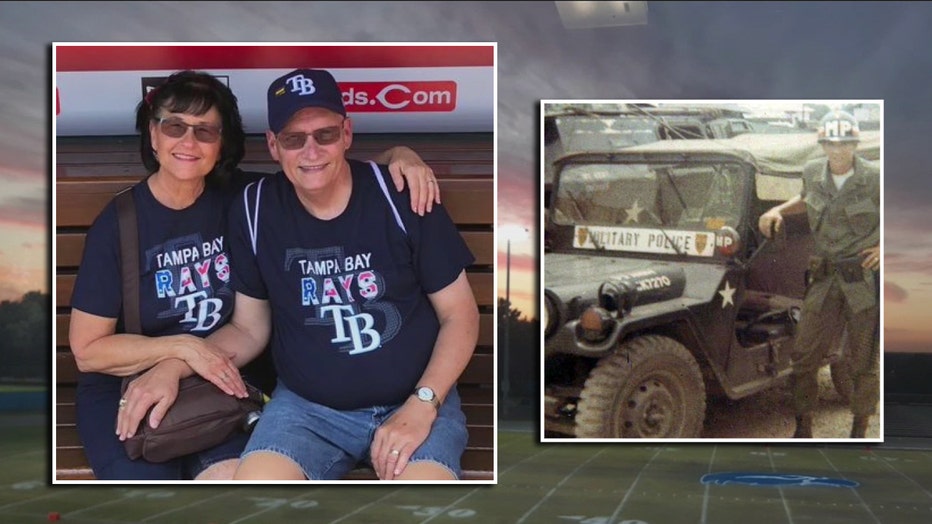 Burnham was involved with many veterans causes, but his most lasting work may have been with his students.

“I think it almost became a mission of his to ensure that the youth and generations to follow learned as much as possible about what these veterans went through,” says Edwards.

What he went through was part of the wisdom he shared and the relationships he formed with students and fellow teachers.

“And you know that he was never going to steer you wrong,” continued Pirotta. “He always had your best interest at heart.”

He had a passion for teaching and for his school.

“I can't imagine what a football game is going to be like without Bruce Burnham’s voice,” added Chambers.

Members of the Armwood High School community are asking the school board to name the school’s press box in honor of Burnham.

Funeral arrangements for Burnham are incomplete.