President Joe Biden gave remarks and signed four bills into law that aim to support veterans and their families on Nov. 30, 2021.

WASHINGTON - President Joe Biden signed four bills into law on Tuesday that were brought forward in support of U.S. veterans, including help for maternity care and another aimed at tackling race and ethnic disparities related to benefits administered by the Department of Veterans Affairs (VA).

Biden, surrounded by sponsors of each bill, first signed S. 1031 into law, which was introduced by Sen. Raphael Warnock, D-Ga. It requires a study to be conducted on race and ethnic disparities for compensation benefits, disability ratings and the rejection of developed benefit claims from VA.

"Lack of inclusivity and consistency hinders the collection of accurate data, which could benefit all veterans and their families," the VFW said in a statement. 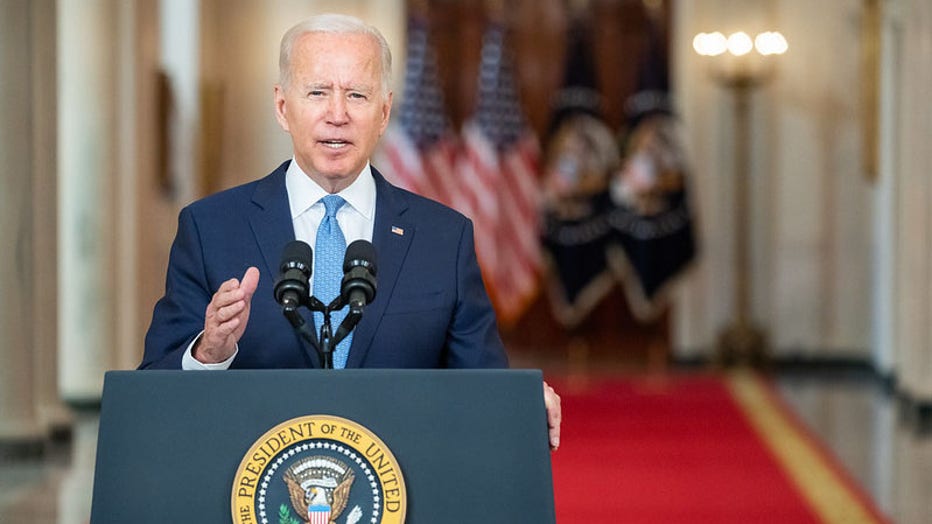 FILE - President Joe Biden delivers remarks on ending the war in Afghanistan, on Aug. 31, 2021, in front of the Cross Hall of the White House. (Official White House Photo by Adam Schultz)

The president next signed S. 894, "Hire Veteran Health Heroes Act of 2021," another bipartisan bill first introduced by Sen. Mike Braun, R-IN, and Sen Maggie Hassan, D-N.H. The bill requires the VA to consult with the Department of Defense to identify and recruit service members with health care occupations to remain in federal health care as VA employees once their military obligations end.

Braun noted staff shortages reported by the VA Inspector General, which has become a "challenge for solving problems in veteran care."

"This bill will empower the VA to proactively recruit active duty medical personnel who are separating from the military at the conclusion of their contract or at retirement to improve health care services for veterans," he said in a statement. "We owe it to our brave veterans who deserve the absolute best services available."

The third bipartisan bill signed into law is called S.1095, "Colonel John M. McHugh Tuition Fairness for Survivors Act of 2021." It requires public colleges and universities to provide in-state tuition to the families of service members who die or become disabled or otherwise cannot receive education benefits from the VA.

President Joe Biden spoke at the Tomb of the Unknown Soldier Thursday in commemoration of Veterans Day and the monument's 100th anniversary.

The final bipartisan bill signed into law is called S. 796, "Protecting Moms Who Served Act of 2021." The legislation, originally introduced by Sen. Tammy Duckworth, D-Il, an Iraq War veteran, supports funding for maternity care for women who served in the military.

Specifically, the legislation directs the VA to implement a maternity care coordination program, offering providers with training and support to better address the needs of pregnant and postpartum veterans. The bill authorizes $15 million in additional program funding for the fiscal year 2022.

"The Department of Veteran Affairs provides critical benefits to ensure that veterans have access to medical care during pregnancy and after their child is born," Rep. Brian Higgins, D-N.Y., who also supported the bill, said in a statement. "This legislation guarantees that veteran mothers’ unique physical and mental maternal healthcare is better understood and treated by healthcare providers."