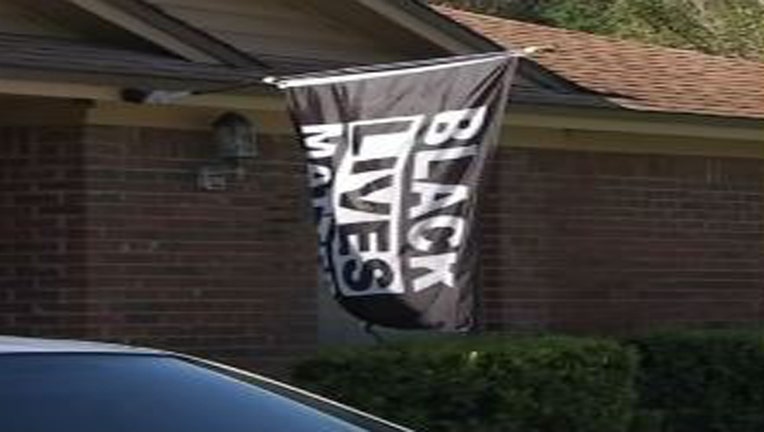 For months, those flags hung from his neighbors' homes.

But when Mickle decided to hang a flag of his own last month — proclaiming that “Black Lives Matter" — his neighborhood association immediately asked him to take it down, calling the flag ”noxious or offensive" under its rules.

If his neighbors could express their support for police, he said, he should be allowed to make a statement of his own.

“My life means something. My life matters. I’m a black man living in a white neighborhood,” Mickle said Wednesday, a day after he filed a lawsuit in U.S. District Court in Jacksonville asserting his civil rights were violated.

The country's racial divisions aren't just flaring up in city streets, government plazas and political discourse. They are also outside our front doors as disputes arise in some neighborhoods over waving the flag of the Black Lives Matter movement.

But Mickle, who is Black, asserts that the association went too far when it went after his flag. He has no intention of taking it down.

In a one-page letter dated Oct. 20, the homeowners association ordered Mickle to take down his flag within 24 hours.

“In order to comply with the Association's governing documents, the Board of Directors requests that you take the following action: Remove the ‘Black Lives Matter’ flag."

The president of the River Point Community Association, Shantell Hughes, declined to answer questions about the lawsuit, saying the matter has “been blown way out of proportion."

“When somebody suffers discrimination, you just can’t turn the page,” lawyer Matthew Dietz said. “He’s rightly concerned that it could happen in the future. The Blue Lives Matter flags hung for months at a time and they still remain. Those flags aren’t considered noxious by the officers of the association. They need to apply their rules equally."

In an earlier statement sent to news outlets, Hughes said the association does not intend to take any further action against Mickle and considered the matter closed.

“The fact that it was a Black Lives Matter flag made no difference,” she said, adding that the flag violated association rules that require that flags be flown on a flagpole and that those flags commemorate holidays, sports teams or be seasonal in nature. The association said it does not prohibit political signs, as long as they are removed in a timely manner.

Hughes said it was unfortunate that Mickle “took offense” to the association’s notice, which she called a routine letter when rules violations occur. She would not say if similar notices were sent to homeowners flying “Blue Lives Matter” flags.

“Unfortunately, this is a politically charged time and the timing was ill-advised,” Hughes said in her statement. “We were obviously not thinking about that and just simply doing our job as we would have with any other type or flag or sign outside of the guideline.”