Teachers protest Board of Education meeting

While the state Board of Education met with Gov. Ron DeSantis in Dover, teachers took the chance to express their concerns about safety as classes resume.

TALLAHASSEE, Fla. - More than a week after Education Commissioner Richard Corcoran ordered schools to reopen in August, members of the State Board of Education on Wednesday said his order has sparked confusion, fear and angst.

Corcoran deflected blame to the media and said his order was designed to offer parents and school districts “complete flexibility” about returning students to classrooms.

But the order, which Corcoran issued July 6 as coronavirus cases soared in Florida, said all school districts must reopen brick-and-mortar schools at least five days a week starting in August, unless local and state health officials direct otherwise.

Board of Education member Michael Olenick offered the sharpest criticism Wednesday, saying there appeared to be a “disconnect” between what Corcoran was saying and what the order stated and called on him to rescind the part of the order that requires brick-and-mortar schools to reopen next month.

“If, in fact, they have flexibility, and we’re acknowledging their statutory role to determine (reopening decisions) in their district, then let’s say clearly that there is no brick-and-mortar requirement and that we are leaving it up to the districts,” Olenick said.

Corcoran, however, said the provision will not be removed because parents need flexibility to send their children back to school campuses, which were shuttered in March after the pandemic hit the state. Children finished the spring in online classes. 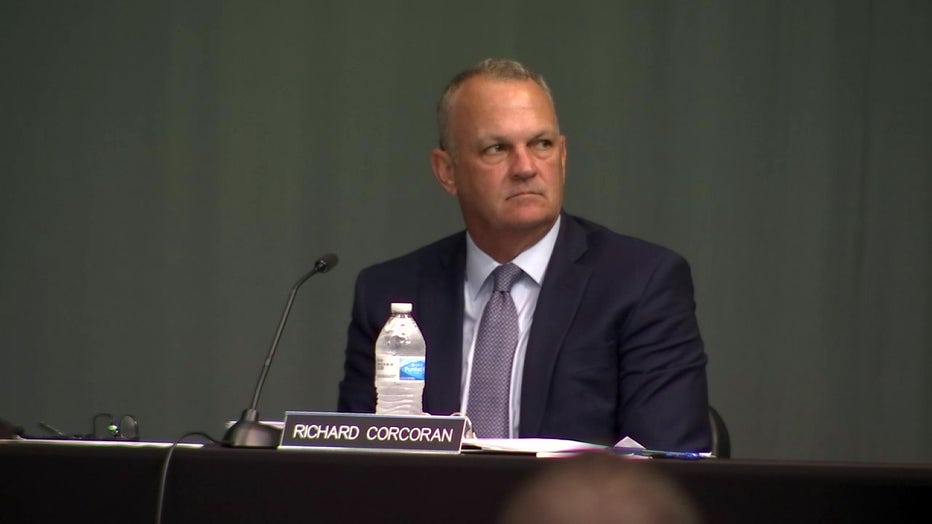 “Part of the flexibility is, if a parent would like to have their child in a brick-and-mortar classroom with a teacher in front of them five days a week, they absolutely should have that option, and it will not come out of the emergency order,” Corcoran said.

Olenick, an appointee of former Gov. Rick Scott, also criticized Corcoran for rolling out the order without first discussing it with the board. He added that the timing of the order appears to be “political in many people’s eyes.”

Corcoran, a former House speaker who was tapped by Gov. Ron DeSantis to serve as commissioner, issued the emergency order on the same day President Donald Trump tweeted that, “SCHOOL MUST OPEN THIS FALL!” Corcoran retweeted Trump’s message that day, but on Wednesday he told board members the order was “weeks in the offing” and was not coordinated with the president, a close ally of DeSantis.

Board member Tom Grady, a former House member, said he thought the order was “timely” and “spot on” because he thinks it’s important people understand that kids are being harmed by not being in classrooms.

“So, the question is: How do we weigh a clear threat to a young child’s education against a murky risk to their health?” Grady said. “I think it's essential that people understand that kids are harmed by not being in school and the support that that order will give the districts in making their own individual determinations is essential.”

Department of Education Chief of Staff Alex Kelly told the board that the order has a “few layers of flexibility,” which include allowing school districts to make reopening decisions in consultation with local and state health experts.

“Nothing in the order is going beyond that key consultation,” Kelly said, adding that if a school reopens, parents will still have the option to send their kids back or opt for online learning through the fall.

Kelly said the order has also given school districts “financial certainty” because it allows them to calculate their attendance using the various models of instruction available.

Because the state’s education finance system is heavily based on the number of students enrolled during a week in October, the order is waiving the requirement and noted funding will be based on pre-coronavirus enrollment numbers.

Board of Education member Marva Johnson said that while she appreciates the flexibility, the state needs to work on its “messaging and clarity” about what it will require school districts to do next month because she has heard from many people who remain confused.

“I don’t think it is for a lack of our teams’ efforts,” Johnson said. “I’m just trying to figure out how we can help cut through some of the morass and some of the confusion, and I think parents are having to suffer through it in the process.”

Board member Ben Gibson agreed with Johnson that the order has led to confusion and angst among parents.

“A lot of the angst is that the state, and the commissioner in particular, has come out and said schools have to be open and we are ordering it as a one-size-fits all,” Gibson said. “But what I am hearing from you is that there is a lot of flexibility.”

DeSantis has faced similar pushback this week about his messaging on reopening schools.

During a roundtable discussion Tuesday with mayors in Miami-Dade County, the governor said schools should reopen because children are at a lower risk of infection and transmission of COVID-19, the disease that had infected 15,014 Florida children under the age of 14 as of Wednesday.

“That is just something that I think we should understand,” the governor said. “It is a serious pathogen overall, but for some reason, the kids are at lower risk.”

Miami Gardens Mayor Oliver Gilbert III told the governor he is concerned about that message, adding that, “when you say there’s minimal risk, the conversation goes terribly different if one child contracts COVID-19 in a school and dies.”

Miami-Dade County is home to the fourth largest school district in the country with roughly 350,000 students. Miami-Dade Superintendent of Schools Alberto Carvalho has said the system will not reopen Aug. 24 if the conditions are the same as they are today.

Miami Beach Mayor Dan Gelber told the governor on Tuesday that he was also concerned about sending school employees and older high school students back to campuses.

“We shouldn’t be sending mandates out into the world because that telegraphs one thing that we don’t want to telegraph, which is ‘Go ahead. It’s fine. The green light is out,’” Gelber said. “I don’t think it is helpful.”

On Wednesday, DeSantis attended the State Board of Education meeting, and while he did not take questions or discuss the state’s push to reopen schools, he addressed safety concerns for adults who work in schools.

“The best interest of the child is paramount, but we also understand that there are a lot of adults who are working in our school system … and I think it is paramount that there is a safe environment for everybody --- not just the kids,” the governor said.

DeSantis said Corcoran is working with districts to ensure a safe environment for adults and children and said schools should offer special accommodations for employees and students with underlying medical conditions.

“I’m confident it can be done because I’ve seen it done in other areas of life over the past several months,” the governor said. “It does take effort, it takes attention to some of the risks involved.”