PALMETTO, Fla. - It started as a dispute over a cell phone but quickly escalated, ending with a 12-year-old girl in handcuffs. A Manatee County deputy's body-worn camera video shows the seventh-grader being forced to the ground.

The 12-year-old girl can be seen and heard on the deputy's bodycam video crying out for her mother – who now says the situation could have been avoided.

"I couldn't believe the way they did that to my daughter, especially when she was sitting there calling for me," the girl's mother, Cecelia, told FOX 13.

The bodycam video was posted online by the group Protect Our Public Schools Manasota. FOX 13 News requested the video from the Manatee County Sheriff's Office on Monday, but has not received a response.

The school says the girl recorded a video on her phone of a school fight, which is a violation of school policy. When she refused to hand over her phone, the situation escalated.

In the bodycam video posted by Protect Our Public Schools Manasota, a school counselor can be heard saying, "I'm all for saving all the kids, but when you use one as an example."

The deputy responds, "I don't want to make examples."

In the video, the deputy can be seen grabbing the girl's wrist after accusing her of manipulating her cell phone through her pants pocket.

In a statement, the sheriff's office said the deputy was trying to help school staff take the phone from the girl before she could either delete the video or post it on social media. 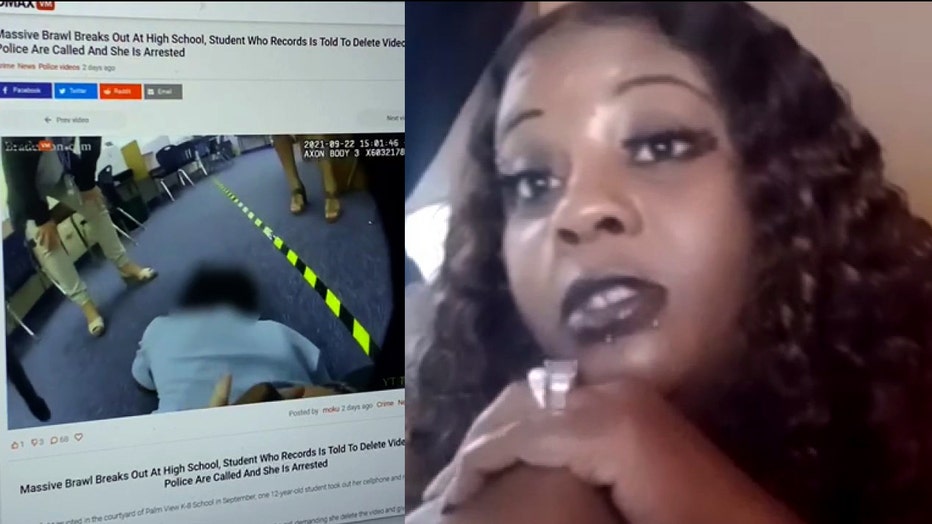 According to Cecelia, her daughter has ADHD and behavioral struggles. The girl's documented individual education plan (IEP) describes how to avoid triggers and deescalate tense situations.

Her mother and her school advocate feel school administrators failed to take the IEP plan into account.

"When a child is in a tantrum or is breaking down, there's methods on how to calm them down. And none of that was done with this child," the girl's special education advocate Linda Montalbano said.

When FOX 13 reached out to Manatee County Public Schools, a spokesperson would not confirm whether the student's IEP plan was followed or if administrators involved in the incident were aware she had one.

"At Superintendent Cynthia Saunders' urging, representatives of the School District met with the Manatee County Sheriff’s Office to review the video of events that transpired at Palm View K-8 on September 22nd to discuss protocols, expectations and ideas for handling similar situations in the future," a Manatee Schools spokesperson wrote in a statement emailed to FOX 13 late Tuesday. "Both agencies are working together to make sure the results of those conversations are shared with School Resource Officers, School Guardians and School Administrators to ensure that procedures and protocols are in place and practiced in such a way as to protect the safety and security of all students and staff at all times. The School District of Manatee County is limited in its ability to respond further due to student privacy rights under the Family Educational Rights and Privacy Act (FERPA)."

As for the 12-year-old girl, she's being charged with battery of law enforcement officer, battery of a school employee, and resisting arrest. The Manatee County Sheriff's Office says the charges stem from the girl pushing a staff member and repeatedly pushing the deputy.

While no one was physically injured, Cecelia says her daughter is emotionally scarred.

"They should have just waited for me to come, like, they called me to come," Cecelia said.

The sheriff's office said the deputy properly reported the incident to his chain of command for review. The office said, "No violation in policy was noted in the use of force demonstrated by the deputy."