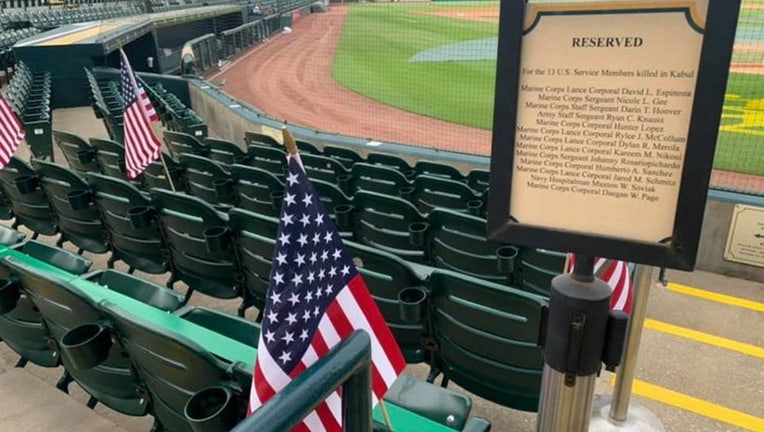 BRADENTON, Fla. - A local baseball team reserved the best seats in the house for the 13 United States service members who were recently killed in Afghanistan.

The Bradenton Marauders posted a photo on their Facebook page, showing a row of prime seats behind home plate blocked off and flanked by American flags.

Next to the row was a sign that read, "For the 13 U.S. Service Members killed in Kabul."

Many businesses have taken to social media to honor the men and women who lost their lives. Restaurants across the country, including some right here in the Tampa Bay area, posted photos of empty tables with beers at each place setting reserved for the 11 U.S. Marines, one Navy sailor and one Army soldier who were killed in the suicide bombing attack at the Kabul airport.

"The 13 service members that we lost were heroes who made the ultimate sacrifice in service of our highest American ideals and while saving the lives of others," President Joe Biden said in a statement Saturday.

Nearly all of them were in their early 20s, meaning they had been just young children when U.S. forces first entered Afghanistan in 2001.

Afghanistan may be on the cusp of even deeper conflict, potentially including a civil war, experts on the region said on the day when suicide bombers attacked outside of Kabul's Hamid Karzai airport.

The deceased include at least one of the Marines — recently promoted Marine Sgt. Nicole Gee, 23 — who were seen in widely circulated photos cuddling Afghan infants they had temporarily rescued from the crush of the crowds outside the airport gates this month.

The Department of Defense identified the victims as: