SARASOTA, Fla. - For the past two years, researchers with Mote Marine, the Florida Fish and Wildlife Conservation Commission, and other organizations have been working to develop ways to fight red tide. On Friday, they may have witnessed the breakthrough they hoped for.

It involves clay being sprayed into the water.

"It’s going to be small baby steps because that’s the most responsible way to go with this type of work," explained Dr. Kristy Lewis with the University of Central Florida’s Center for Integrated Coastal Research. 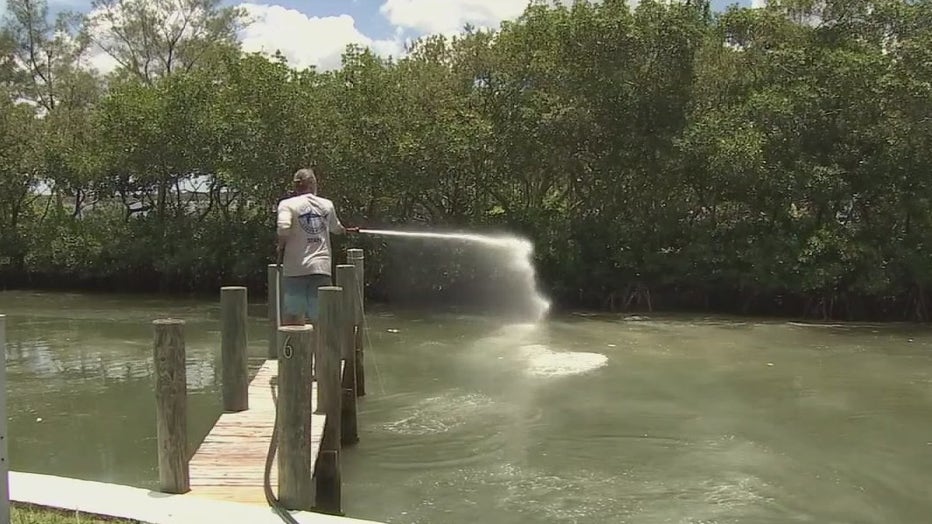 "We are seeing some definite change in the water column that we think are positive," Lewis said.

This method has been used for decades in South Korea and China to fight algae blooms.

The slurry of clay and seawater is sprayed in areas where red tide is present, like the canal where researchers focused their efforts Friday.

"They generally come together and then they create this umbrella and matrix and takes the red tide out of the water column and at the same time, we are hoping, taking nutrients out that could fuel the red tide and it takes it down to the seafloor," Lewis said.

Testing is done every hour to see if red tide cell counts diminish. By sight test, it appears to be working.

"I was so happy they were able to get this test done. A lot of good will come out of this. A lot of data they will have to look at, but we are hopeful this will be beneficial in solving our red tide blooms," said Rep. Fiona McFarland (R-District 72).

The clay project is one of more than 25 in the works.

"Florida right now is leading in the world in developing these new technologies to mitigate harmful algal blooms and that means we need a visionary Legislature and a visionary governor that understand the importance of protecting and conserving this environment and this is one way we will be able to do that," said Michael Crosby, president and CEO of Mote Marine Laboratory and Aquarium.

More testing will need to be done, but for now, it's a positive beginning.

"We want to make sure that the cure is not more harmful than the disease, that is what we are doing and then we scale up this process and we collect the data and report it back," Lewis said.

Researchers say data is key in this testing. If they notice any harmful results, they will stop or lessen the amount of clay used. If it's positive, they can scale up testing to larger sites.