NORTH PORT, Fla. - The FBI has confirmed that human remains found this week at a Florida park are that of Brian Laundrie, the only person of interest in the Gabby Petito case who has been missing himself since last month.

The FBI Denver field office confirmed that dental records were used to match what North Port PD referred to as "bones" found at the Myakkahatchee Creek Environmental Park in North Port Wednesday.

Human remains were found Wednesday at the Myakkahatchee Creek Environmental Park in North Port, Florida, along with a backpack and a notebook linked to Laundrie. Authorities said at a news conference that it will take time to identify the remains, which forensic teams were examining.

Human remains found are believed to be Gabby Petito's fiance Brian Laundrie, who has been missing for over a month, after they were discovered near items belonging to Laundrie in Myakkahatchee Creek Park. With an autopsy expected to come next, Dr. William Morrone, chief medical examiner in Bay County, Michigan, takes us inside the coroner's office and how the process will work.

Laundrie's parents, who reported him missing from their North Port home since Sept. 14, were at the park Wednesday morning and "appeared emotional" as they left, FOX News reported. Earlier, Bertolino confirmed that Chris and Roberta Laundrie were present when the remains and items were found.

Michael McPherson, chief of the Tampa FBI office, said at the news conference Wednesday afternoon that investigators were "working diligently" to get answers. He added that the items and remains were found in a swampy area — home to alligators, snakes, coyotes and other wildlife — that had previously been underwater.

"It's likely the team will be on-site for several days," McPherson added.

K9 dogs trained for the detection of human remains returned to the park on Thursday, according to the Pasco County Sheriff's Office.

RELATED: Brian Laundrie lookalike has hotel door kicked in by US Marshals, deputies in arrest attempt

Brian Laundrie is wanted on a federal warrant, charged with intent to defraud for one or more unauthorized uses of Petito's bank card, between Aug. 30 and Sept. 1, taking more than $1,000. Officials have not called him a suspect in Petito's homicide.

A Wyoming coroner said Petito died by strangulation, and her body was likely outside for up to four weeks, but no suspects have officially been named in her death.

Petito disappeared during a cross-country trip in a converted camper van with Brian Laundrie, her fiancé, sparking a nationwide search for the 22-year-old that ended with authorities finding her remains at a Wyoming national park.

Laundrie had returned to their shared North Port home on Sept. 1 in the camper van — alone. Petito wasn’t reported missing until Sept. 11 when her family didn’t hear from her nor the Laundrie’s following his return to Florida.

After days of intense searching at the Myakkahatchee Creek Environmental Park and the vast Carlton Reserve park nearby, things had quieted down earlier this week — and the park even reopened to the public on Tuesday.

But interest centered on the park once again Wednesday when Laundrie's parents took part in a search with the FBI and police from North Port.

Chris and Roberta Laundrie on Oct. 20 visited Myakkahatchee Creek Environmental Park. Video shows the couple with a law enforcement officer huddling as the officer appears to show the couple an unknown discovery.

Laundrie’s parents left their North Port home just before 7:15 a.m. ET and arrived at the park, where two men in hiking gear – including at least one who later identified himself as a law enforcement officer – began trailing behind them, according to FOX News. The Laundries and one of the men appeared to discuss a discovery before the parents left the park, which was then closed to media and the public.

The Laundries discovered a white bag and a dark-colored object after traveling through a patch of brambles at the edge of the brush at a clearing. They could be seen putting the object into the bag and handing it over to a law enforcement officer, according to FOX News. 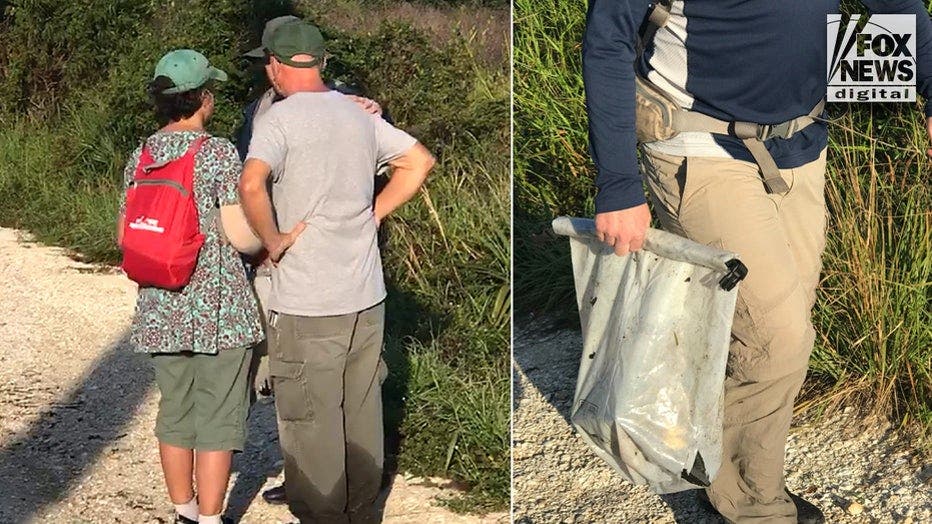 Images obtained exclusively by Fox News show Chris and Roberta Laundrie in the Myakkahatchee Creek Environmental Park with at least one law enforcement officer on Oct. 21, 2021.

"Chris and Roberta Laundrie went to the Myakkahatchee Creek Environmental Park this morning to search for Brian," family attorney Steven Bertolino later confirmed in a statement. "The FBI and NPPD were informed last night of Brian’s parents’ intentions and they met Chris and Roberta there this morning. After a brief search off a trail that Brian frequented some articles belonging to Brian were found. As of now, law enforcement is conducting a more thorough investigation of that area."

Cadaver dogs and a medical examiner were then called to the park. The FBI later confirmed that human remains were found in an area that had previously been underwater – not uncommon for the swampy Florida park – along with a notebook and backpack belonging to Laundrie.

Investigators are now working to confirm the identity of the remains.

"I know you have a lot of questions, but we don't have all the answers yet," McPherson told reporters on Wednesday, declining to take questions. "We are working diligently to get those answers for you."

The Laundrie family did not have anything to add after that.

"Chris and Roberta will wait for the forensic identification of the human remains before making any additional comments," attorney Steve Bertolino told FOX 13 News.

Petito’s body was found Sept. 19 on the edge of Wyoming’s Grand Teton National Park, which the couple had visited. The coroner there concluded she died of strangulation and her body had been where it was found for three or four weeks.

Their cross-country journey began early this summer from their shared home with Laundrie’s parents in North Port, traveling north to Long Island, New York, and then west. The goal was to reach Oregon by the end of October, according to their social media accounts.

However, Laundrie returned to his parents' home in North Port on Sept. 1 in the camper van. Petito also resided there but was not with him when he came back. By Sept. 11, Petito’s family reported her missing, setting off a search that garnered attention from across the country.

Police said Laundrie and his family were refusing to cooperate with the investigation and would not speak to authorities.

The Moab City Police Department in eastern Utah have released bodycam footage of 22-year-old Gabrielle "Gabby" Petito and her boyfriend, Brian Laundrie, being pulled over on Thursday, August 12.

It was later revealed that the couple was stopped on Aug. 12 by police in Moab, Utah, after they had a physical altercation. Officers recommended that they spend the night apart but no charges were filed. The police report, body cam video and 911 call were later released following the interaction.

This story was reported from Cincinnati. FOX 13 Tampa Bay contributed.