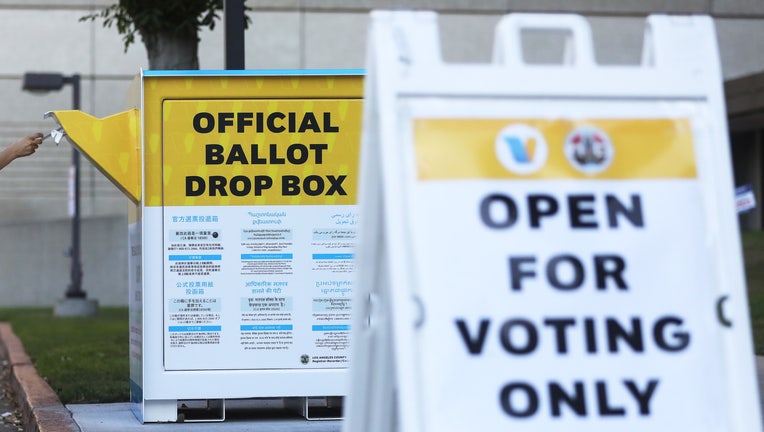 A pedestrian places a ballot in an official mail-in ballot drop box outside of the L.A. County Registrar’s office ahead of Election Day on October 14, 2020 in Norwalk, California. Over 1 million Californians have returned their mail-in ballots with E

The apparent arson took place around 8:30 p.m. in the 4100 block of Baldwin Park Boulevard in Baldwin Park, a small city about 20 miles east of Los Angeles.

Crews responded to the fire, which was just outside the city’s public library, and extinguished the flames, Fox 11 Los Angeles reported.

A number of ballots were reportedly inside the box. Investigators say they believe the ballot box was set on fire on purpose.

It was unclear how the fire was started, but the blaze is being investigated as an arson, Los Angeles County Fire Department told the Los Angeles Times.

No arrests have been made and no suspects have been identified. Sgt. Juan Serrato told the paper that authorities took custody of the damaged ballots and they will be transferred to the county’s registrar-recorder’s office later Monday.

The Baldwin Park Fire Department could not be reached for comment.

The fire comes amid a surge in vote-by-mail ballots ahead of the November election.

RELATED: Florida among 10 states that allow ballots to count if voters die before Election Day

The state Republican Party has removed their unstaffed, unofficial ballot drop boxes that state officials deemed illegal, California’s secretary of state said Friday, and subpoenas are being issued to get more information about them as the state attorney general looks into possible election law violations.