TAMPA, Fla. - The national conversation around racial inequality and injustice reemphasizes the systemic racism throughout America’s past and historians say examples are seen in the lost African American graves being rediscovered in the Tampa Bay area.

Racial injustice came in many forms throughout history, but following the alleged murder of George Floyd at the hands of a Minneapolis police officer, historians said the conversations gripping the nation now are familiar to ones we’ve had before.

"Here particularly in Tampa, it really brings back the conversation that we were having a few months ago about the African American cemeteries that have been either lost or covered or forgotten or some could even say stolen through the years," said Rodney Kite-Powell, the director of the Touchton map library at the Tampa Bay History Center.

Last year archaeologists began rediscovering century-old African American cemeteries that were erased from existence. The burial sites include the Zion Cemetery in Tampa where the Robles Park apartments stand, Ridgewood Cemetery on the grounds of King High School in Hillsborough County, and North Greenwood Cemetery along Holt Avenue in Clearwater. 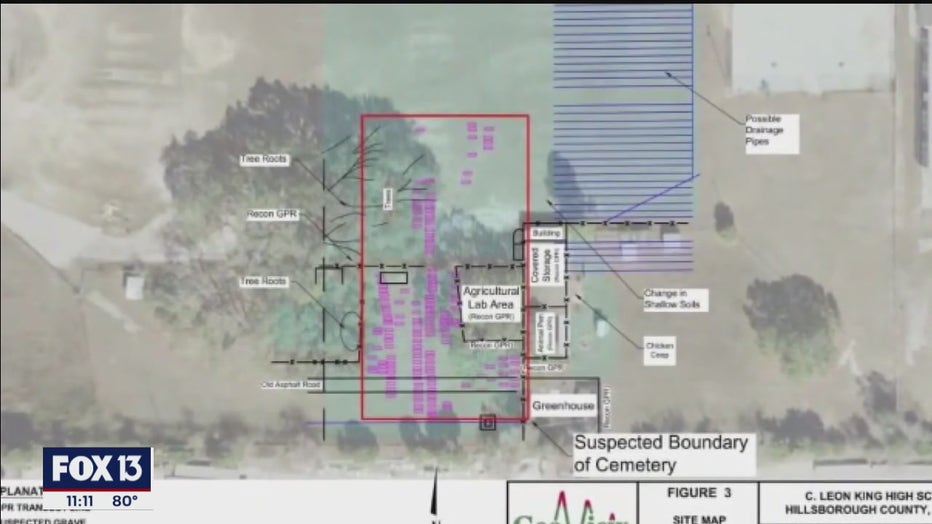 "We want to make sure that we give these people the proper respect and dignity that they deserve," said Carlton Childs of Clearwater when the first Clearwater graves were uncovered in February.

The University of South Florida said its researchers recently found another possible burial site on the property of Frank Crum staffing company in Clearwater. According to historical documents, that cemetery was called the St. Matthews Baptist Church Cemetery.

The African Americans buried on those sacred grounds were oppressed and treated as less than equals because of their skin color. Kite-Powell said it’s an example of systemic racism in the past, as current protests call for change.

"It just reinforces the need to have those conversations, and it shows that racism doesn't just lie in police brutality or redlining of neighborhoods," Kite-Powell said.

He added that it’s important to remember the past to know how we arrived to the present. Leaders in Hillsborough and Pinellas counties are discussing how to move forward and honor those who are buried through a memorial project, a marker with names or other ideas.

"It's all part of the larger healing process that I think we all would like to see going forward," said Kite-Powell.

He said research is ongoing to find other forgotten cemeteries that are not exclusively African-American cemeteries although the African American burial grounds were predominantly erased.

Hillsborough County school leaders said they are working on putting together a lesson for students to explain how that part of African American history could be erased and later uncovered on the district’s property. A spokesperson said Hillsborough County Schools is waiting for the state to finish its review of the archaeological discoveries on King High School’s grounds to determine jurisdiction.

Possible burial sites are also being investigated by the federal government at MacDill Air Force Base and where the Port Tampa cemetery was located.