Cicada molts its exoskeleton after emerging from the ground

Once off the ground, cicadas shed their skins to try and survive being eaten before moving onto the mating phase to create the next cycle of Brood X cicadas.

CINCINNATI - A cicada was blamed for causing a car crash in Ohio after flying through an open window and hitting the driver in the face, authorities said.

The single-car crash was reported Monday night in Cincinnati. Police shared photos of the damaged vehicle, which crashed into a utility pole in the 2600 block of Riverside Drive.

"Caused by a cicada that flew in through an open window striking the driver in the face. #nothinggoodhappenswithcicadas #cicadas2021," the Cincinnati Police Department wrote on Twitter.

The driver suffered minor injuries, according to the Associated Press.

Police also advised drivers to keep their windows closed for the time being. 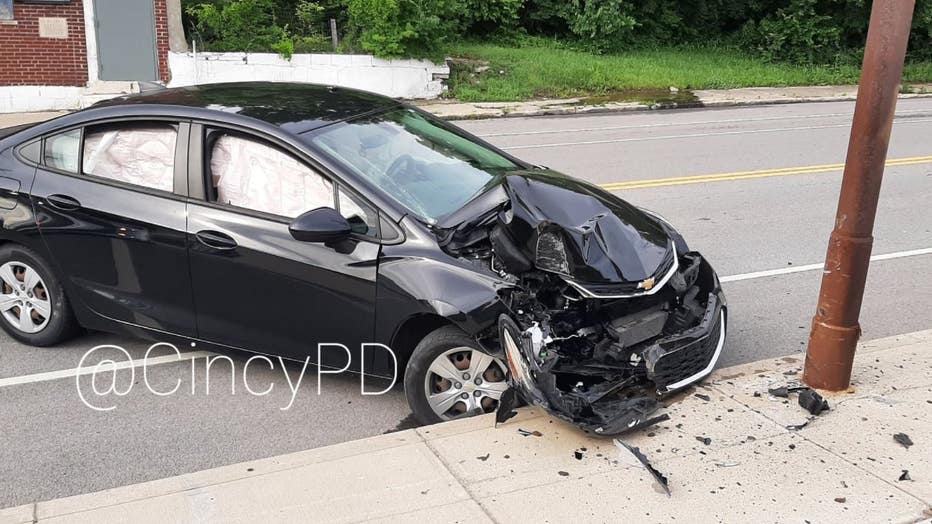 The car crash was reported on June 7, 2021, in Cincinnati, Ohio. Police said a cicada flew into the driver’s open window and struck the individual in the face. (Photo credit: Cincinnati Police Department)

Brood X, the largest and most widespread brood of cicadas in the U.S., has begun to swarm the region to mate after 17 years underground. The periodical cicadas only begin to emerge in large numbers when the ground temperature reaches 64 degrees. They last appeared in 2004.

Cicada Mania, a website that tracks cicada life cycles, said they were expected to appear across 15 U.S. states.

While cicadas don’t sting or bite, their massive presence can be disruptive — ruining weddings and other large outdoor events amid so many swarming bugs. The cicada noise and smell can also be an inconvenience.

The noise is part of their mating ritual as males try to attract females by singing to them. When females are interested, they twitch their wings, according to experts.

When cicadas die, they fertilize the trees and may smell a bit. When many of them die in the same place, it can "smell like roadkill," entomologist John Cooley told FOX Television Stations.

"Get a shovel or a rake and move them somewhere far away," he suggested.

RELATED: Brood X cicada molts its exoskeleton after emerging from the ground after 17 years