CRYSTAL RIVER, Fla. - Phil and Gay Courter, and 3,709 others, departed Tokyo, Japan January 20 for a 14-day cruise aboard the Diamond Princess. 44 days later, the couple is finally back at home in Citrus County.

They've been through a 14-day on-ship quarantine followed by a fraught evacuation back to the United States and then another 14-day quarantine at Joint Base Lackland in San Antonio, Texas - before they were declared disease-free and allowed to go home.

Their ordeal began after a passenger on their ship tested positive for novel coronavirus COVID-19 Feb. 1. Princess Cruises announced the Diamond Princess would return early so health officials in Japan could review the health status of each guest.

That was Feb. 4. At the time, the cruise ship was the largest outbreak of the virus outside of mainland China - 218 people onboard ended up testing positive for the disease.

At the beginning of their quarantine, Gay was running out of insulin. Tampa General Hospital and Publix helped expedite an overseas shipment, but it got stuck in customs. Courter said media attention helped get her some medicine from a Japanese pharmacy.

On Feb. 17, the U.S. government organized the evacuation of 300 American passengers and crew from the Diamond Princess, bringing them to Lackland for further evaluation.

Citrus County couple's quarantine ends; another one to start

Today, Gay and Phil continue to appear virus-free and are "thrilled to be home" with their Cavalier King Charles spaniel, Willoughby.

A statement released on behalf of the couple said, "The Courters want to thank everyone for all their help in getting them home, 'especially our friends in the media. We believe the media coverage was key to the decision to retrieve the Americans in quarantine.'"

“For many of us, today is a homecoming,” said Gay. “We are thrilled to hear that the last of the crew, including Captain Arma, are off of the ship. Still, many have yet to return home. We have friends in medical facilities in Japan, Australia, California, Nebraska and Texas. We are also still mourning the loss of seven of our shipmates, the most recent in Australia.”

“We’d like to recognize the effort our friends, family, and professional colleagues put into getting the word out and improving the outcome for the passengers and crew on the Diamond Princess,” added Phil.

PREVIOUS: Citrus County couple happy to be back in U.S. after cruise-ship coronavirus quarantine 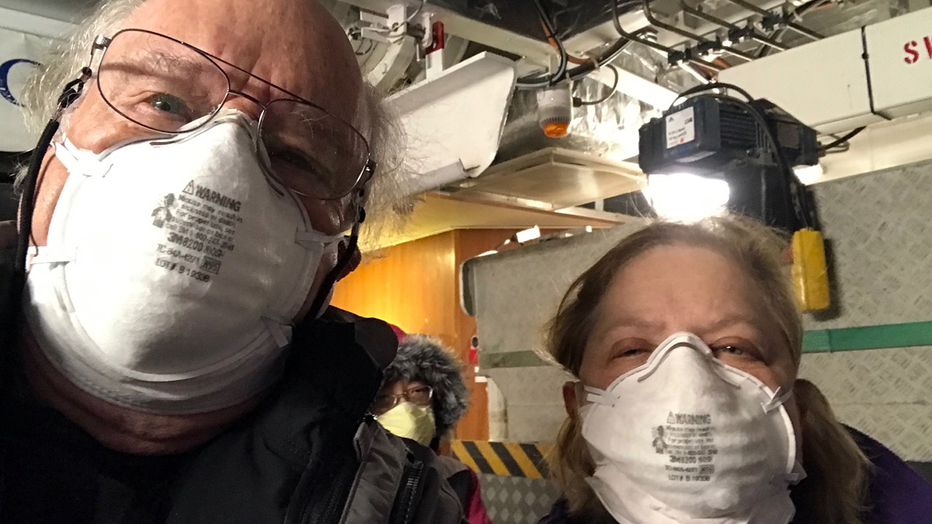 The Courters aboard the flight out of Japan. (Phil Courter photo)

Statement from the Courters:

“While the quarantines for us were difficult--especially putting our lives on hold for a month--we couldn’t have been cared for better. The Princess organization has gone far and above anyone’s expectations in terms of care and making sure nobody suffers any financial burden.  We received personally written notes from Princess employees, gift bags, and had frequent calls from their care team. They assisted in travel arrangements and are paying all return travel expenses--even delivering extra luggage for items we have accumulated. Nothing that happened was their fault and they have acted as though we are family members--not customers.

“The team assembled to care for us has run an excellent quarantine designed to keep us all as safe as possible from the disease and to care for our every need: Food, comfort, physical and mental health. So many agencies worked together, starting with the Assistant Secretary For Preparedness and Response who is responsible for overseeing all disasters and public health emergencies. Medical management was handled by their Incident Management Team and the National Disaster Medical System Team.  Many of our needs were tended to by their Service Access Team and they were supported with tents, equipment, and supplies by the Logistics Response Assistance Team. The US Public Health Service, which includes doctors, nurses, therapists, and pharmacists also looked after us. And that was just half the team!

“The Centers of Disease Control (CDC) came with their Public Health Response Unit who are studying this very new disease and provided epidemiological surveillance, testing, and, most importantly, infection prevention and control for both the evacuees and the support staff. Their Epidemiological and Surveillance Lab team monitored us to see who might be at risk. The Global Migration and Quarantine team supervised isolation measures and monitoring us during the potential incubation period. Finally, the US Marshals Service provided security. This was a huge effort and designed to keep us safe and the community healthy.

“And a big ‘thank you’ to our hosts at Joint Base San Antonio Lackland.  We will miss waking up to reveille, going to sleep with Taps, and most of all, our meaningful pause during your retreat ceremony.”