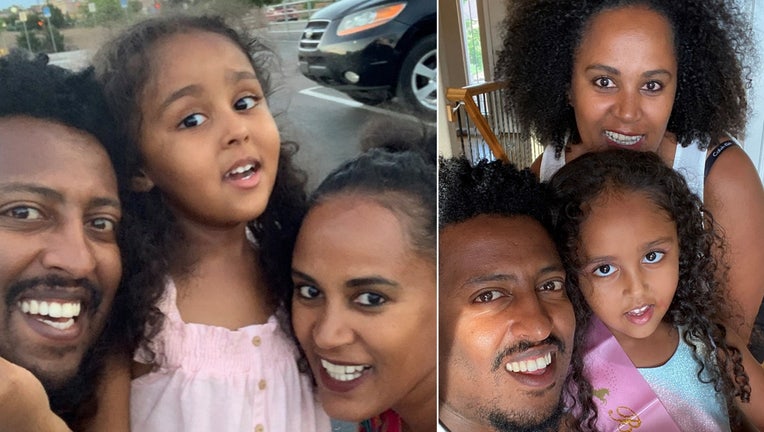 Wongel Estifanos and her family are pictured. (Provided by Dan Caplis Law Firm)

GLENWOOD SPRINGS, Colo. - The family of a 6-year-old girl who died at a Colorado theme park last month has sued the park for wrongful death after operators failed to properly secure their daughter on one of the park rides.

Estifanos Dagne and Rahel Estifanos, the parents of 6-year-old Wongel Estifanos, sued Glenwood Caverns Adventure Park on Tuesday, according to a copy of the lawsuit obtained by Fox News.

"The family is crushed," Dan Caplis, the attorney representing Estifanos Dagne and Rahel Estifanos, told Fox News. "Which is one reason they’re doing this. They want to make sure no other family is ever devastated like this again, that no other child is ever killed like this again."

In an email to Fox News, a spokesperson for Glenwood Caverns said: "It would be inappropriate to comment on pending litigation. Our hearts go out to the Estifanos family and those impacted by their loss."

6-YEAR-OLD DIED AFTER THEME PARK RIDE OPERATORS FAILED TO BUCKLE HER IN: REPORT

Wongel died on Sept. 5, after she fell from 110 feet on the Haunted Mine Drop ride at Glenwood Caverns Adventure Park. After the incident, officials from the Colorado Division of Oil and Public Safety released a report that found Wongel was not properly secured into her seat by ride operators.

According to the lawsuit filed by Wongel’s parents, the 6-year-old was riding the Haunted Mine Drop with her uncle, who believed ride operators were "properly securing Wongel on the ride."

However, when the ride stopped at the bottom of the 110-foot mine shaft, Wongel’s uncle reportedly looked over to see if his niece had enjoyed the ride, but instead was "stricken with terror" when he saw she wasn’t in her seat.

"Wongel’s uncle then saw Wongel’s battered body at the bottom of the mine shaft," the lawsuit said. "Wongel had fallen to her death, suffering numerous fractures, brain injuries and internal and external lacerations."

According to the lawsuit, Glenwood Caverns Adventure Park had at least two other incidents where ride operators failed to make sure all riders were properly buckled in, one in July 2018 and one in August 2019.

In the 2018 incident, a woman reportedly emailed Glenwood Caverns to inform the park that a teenage boy on the ride with her was not properly secured on the ride, the lawsuit said.

According to the lawsuit, a Human Resources manager from the theme park responded to the woman, saying that the park had been notified of the incident and that operators would be retrained.

RELATED: Elk in Colorado with tire around neck for 2 years freed

In the 2019 incident, a man reportedly emailed Glenwood Caverns to tell them that when he was on the ride, he had informed the ride operator that he wasn’t buckled in, but the operator "argued with the passenger and insisted that the passenger was buckled in," the lawsuit said.

The lawsuit states the family is seeking wrongful death damages and notes that both events "involved the same reckless failure that later killed Wongel."

According to the report from the Colorado Division of Oil and Public Safety, Wongel was not properly secured into her seat.

The ride’s operators apparently did not notice that she was sitting on top of her seatbelts instead of being properly strapped in. When the ride’s system alerted the operators to the issue, they reportedly took "several incorrect steps" and dispatched the ride after resetting the seatbelt monitors.

State officials inspected the ride several days after the incident and determined that the ride itself was operating correctly.

The report concluded that the ride’s operators did not properly prepare the ride before allowing passengers to board. The seat belts had apparently been buckled during a previous ride when the seat was empty and was not unbuckled after that ride returned to the station.

The ride operators also violated the Amusement Ride and Devices Regulations by not following the proper operating procedures.

The report also stated that the ride’s operating manual did not properly instruct the operators on how to address errors.