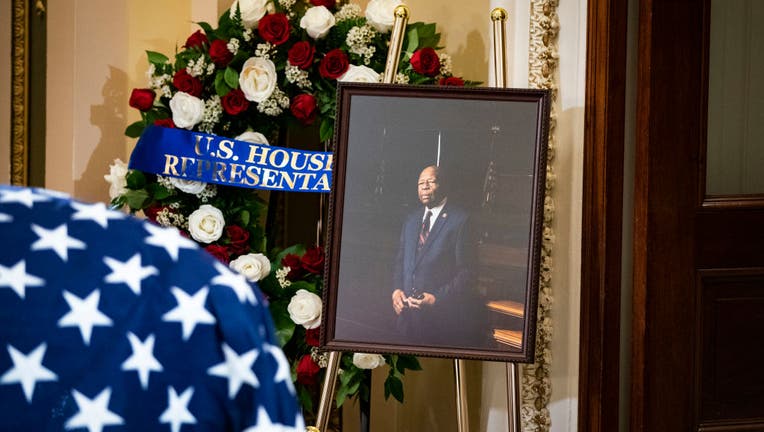 WASHINGTON, DC - OCTOBER 24: A portrait of late Maryland Representative Elijah Cummings sits near his casket outside the House Chamber at the U.S. Capitol on October 24, 2019 in Washington, D.C.Cummings passed away on October 17, 2019 at the age of 6

WASHINGTON (AP) - Members of Congress bid a tearful farewell Thursday to Rep. Elijah Cummings, hailing the son of sharecroppers as a "master of the House" as the Maryland Democrat became the first African American lawmaker to lie in state in the U.S. Capitol.

Lawmakers eulogized Cummings as a mentor and close friend, with a voice that could "shake mountains," in the words of Senate Democratic Leader Chuck Schumer, and a passion for justice and his hometown of Baltimore.

"He had a smile that would consume his whole face. But he also had eyes that would pierce through anybody that was standing in his way," said Republican Rep. Mark Meadows, whose bond with the Cummings was among Congress's most surprising friendships.

"Perhaps this place and this country would be better served with a few more unexpected friendships," Meadows added, growing emotional. "I know I've been blessed by one."

Cummings' death at 68 on Oct. 17 stunned and saddened many on Capitol Hill accustomed to seeing him with the gavel as chairman of the House Oversight and Reform Committee — or zipping by on his scooter between votes. On Thursday, his casket rested in National Statuary Hall for the service and was later moved to a passage directly in front of the House chamber, where he served for 23 years. The doors were pinned open in his honor as the public filed past.

The chairmanship gave Cummings a sizable role in the impeachment proceedings against President Donald Trump. The two tangled last summer when the president insulted Cummings and suggested he pay more attention to his impoverished city than to investigations.

Cummings responded by inviting Trump to visit his hometown and assuring him he would be welcomed. 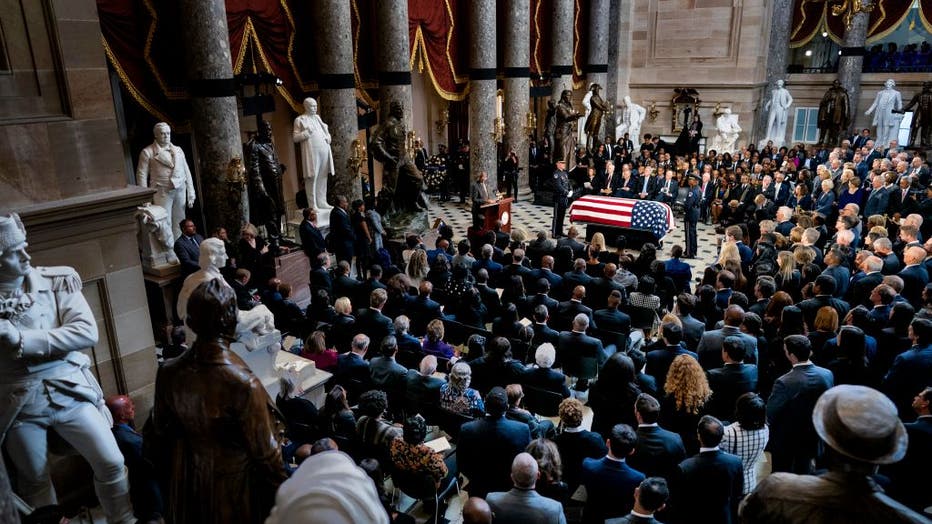 Cummings never left Baltimore, friends and family recalled Thursday, even as he tended to official duties in Washington.

Another child of Baltimore, House Speaker Nancy Pelosi, D-Calif., remembered the man she's called "sweet Elijah" and said Cummings had been the "North Star" for the Democrats he served alongside.

"Elijah was truly a master of the House. He respected its history, and in it, he helped shape America's future," Pelosi said.

"He was also the mentor of the House," she told the friends and loved ones assembled among the statues in the gilded, semicircular room.

Last year when leaders assigned members to committees, Cummings said, "'Give me as many freshmen as you can. I love their potential and I want to help them realize it," Pelosi recalled.

Rep. Karen Bass, D-Calif., chairwoman of the Congressional Black Caucus, said Cummings was respected and revered in the caucus, "a quiet giant" whose words were heeded.

"He pulled no punches. He was authentic to the core and a champion of our democracy," Bass said.

Later in the services, the Morgan State University Choir sang, "If I Can Help Somebody" from the balcony overhead.

By day, Cummings was at the Capitol in the halls of power, McConnell said, but at night he returned to Baltimore to encourage unity. Taking to the streets with a bullhorn, Cummings helped quiet the disturbances.

House Majority Whip James Clyburn, D-S.C., recalled connecting with Cummings over their shared roots as "PKs" — preachers' kids — who followed their own paths to Congress rather than their fathers' into the ministry.

Nonetheless, Clyburn said, "Elijah's service was a soaring, instructive sermon" on justice and fairness. Cummings frequently urged colleagues to think about how their actions would affect children, and he was an outspoken critic of Trump administration policies that separated children from their families at the border. 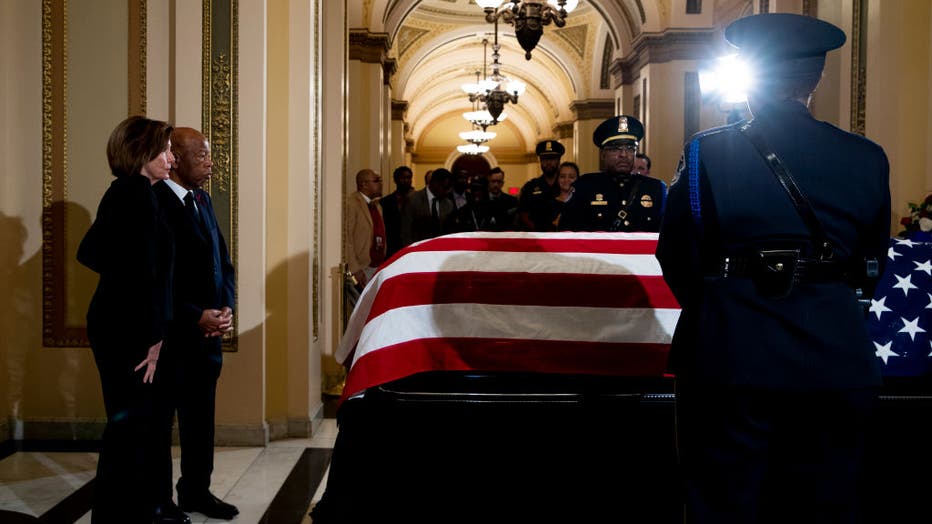 WASHINGTON, DC - OCTOBER 24: House Speaker Nancy Pelosi (D-CA) and U.S. Rep. John Lewis (D-GA) pay their respects over the flag-draped casket of U.S. Rep. Elijah Cummings (D-MD) as Cummings lies in state outside of the House Chamber in the Will-Rodge

House Majority Leader Steny Hoyer, D-Md., recalled that during the 2015 Baltimore protests, Cummings was "a calming influence in a sea of rage."

Hoyer and other speakers remembered a frequent Cummings lament when events went awry or politicians acted badly: "We are better than this," Cummings would thunder in his baritone.

As Oversight chairman, Cummings led multiple investigations of the Trump White House, including impeachment. Although his health was failing in recent weeks, Cummings joined strategy calls with Pelosi and other House chairmen and signed subpoenas from his hospital bed.

"When we're dancing with the angels, the question will be asked: In 2019, what did we do to make sure we kept our democracy intact?" he said after a February hearing with Trump's former attorney, Michael Cohen.

The phrase was one he often used as a reminder of his own mortality.

"As Elijah begins his hallelujah dance with the angels, may we look at his life and his work as dance lessons for our future entry into the silent halls of death," Hoyer said.

"Our country," Schumer said, "has lost a giant."