Two officers with the Jamestown Police Department made a surprise visit on Thursday to congratulate a boy whose cancer is in remission. (Video: Jamestown PD via Storyful)

JAMESTOWN, N.Y. - Two officers with the Jamestown Police Department made a surprise visit on Thursday to congratulate a boy whose cancer is in remission.

"Officers Johanson and Swan made a special stop to see Michael who has been battling cancer," the Jamestown PD wrote in a Facebook post with a video of the visit. "Michael received the amazing news that his cancer is now in remission."

The officers let Michael sit in the driver's seat of their squad car and even taught him how to flip the switch to trigger the siren. When the siren kicked in, Michael's face lit up as he heard the sirens blaring.

Back in September 2020, Michael received a diagnosis of B-cell acute lymphoblastic leukemia, according to his mother, Nichole Olvey. But after undergoing months of treatment, Michael's cancer is now in clinical remission.

"He's maintained honor student status throughout this fifth-grade year while battling cancer," Nichole said. "He's a good kid and the support and love is definitely inspiring him to keep going."

Police also shared photos of the officers posing with Michael. One photo shows him wearing a police utility vest with a radio.

"We at Jamestown Police Department want to congratulate Michael on his remission diagnosis!" the department wrote on Facebook. "Keep fighting and keep being brave Michael!"

Jamestown is a city in western New York, about 75 miles south of Buffalo.

This story was produced in New York City with Storyful. 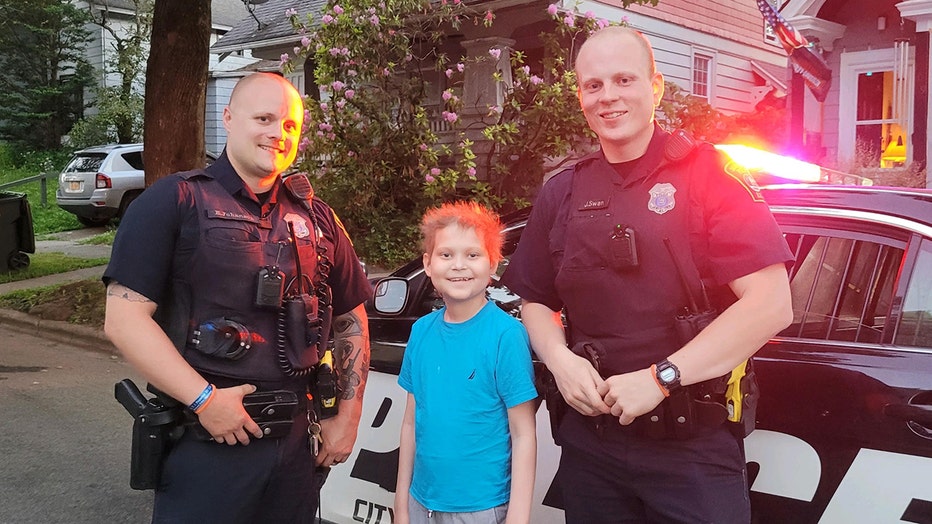