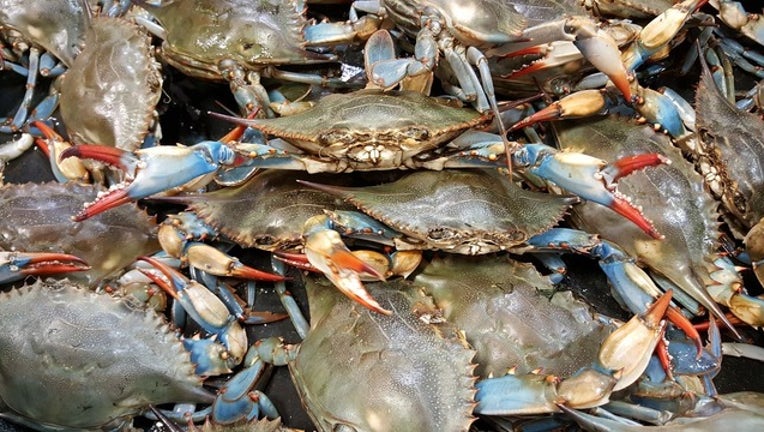 Health officials have issued a warning after they said people became dangerously ill from certain types of packaged crab meat.

While Maryland Blue Crabs are a staple in the DMV, many places do sell crabs, packaged crab meat, and crab cakes with crab from elsewhere.

The National Aquarium in Baltimore reports that due to environmental degradation and years of overfishing, there’s not enough blue crab in the region to support demand, and grocery stores and restaurants often resort to selling imported crab.

At the peak of crab season, the Municipal Fish Market in DC is hopping. Plenty of shoppers are buying their crabs by the bushel. But buyer beware -- if you don’t shop local and check package labels, imported crab meat could make you sick.

According to ocean conservancy organization Oceana, 33 percent of the seafood purchased in the United States is actually mislabeled.

The National Aquarium reports that under current law, crab meat can be imported from around the world, pasteurized in-state and relabeled as "Maryland crab meat."

Nine people have contracted dangerous Vibrio infections in Maryland alone. The state’s Department of Health is warning residents to not eat crab meat from Venezuela.

“We’re selling a lot of crab meat, shrimp, lobster, whatever you want. We’re steaming it for you. And as far as this crab meat, we gotta get it from the eastern shore now, because we heard from the media what’s going on," said Clarence Goodman, with Jessie Taylor Seafood.

Goodman says the company is not taking any chances -- sticking with products almost exclusively from the eastern seaboard.

“I’ve got crab meat, I’ve got oysters, I’ve got clams, I’ve got the mussels. I’ve got, wow, 29 different kinds of fish,” said Goodman.

He says there are not carrying any products that contain Venezuelan crab meat. They're pulling the product off shelves after reports of the Vibrio outbreak.

Vibrio causes diarrhea, cramps, vomiting, and fever in those affected. Two people became so sick they were hospitalized.

The fresh, non-pasteurized tubs of crab were labeled under different brand names but all came from Venezuela.

Goodman says this time of year he’s not worried about losing one product, and business is booming.

“This is peak season, we’re having a good Fourth of July weekend," he says.

The crab in question comes in the little plastic tubs. Consumers should look for a label on the side of the container that says where the meat is from. If it comes from Venezuela, you don’t want to get it.

Diners should also pay attention when buying crab cakes as well. A 2015 study from Oceana found that 38 percent of crab cakes being advertised as having locally sourced Chesapeake blue crab were actually made of imported meat.

In the state of Maryland, only a few dozen restaurants in the state reliably make their crab cakes from local crab meat and the state does not require restaurants to identify the specific source of the meat.

The state has a listing of "True Blue" local restaurants that serve Maryland blue crab.