The heavy duty demolition of the St. Petersburg Pier really gets going next week, but Wednesday a pair of city workers with a pick-up pulled up some of the bricks from the Pier's pedestrian walkway.

Their effort is part of the historic preservation requirements contained in the city's permit to demolish its 1920's vintage Pier and its 1960's vintage inverted pyramid. The power will also be cut this week.

Next week, the well-known structure at the end of the Pier gets stripped. City engineer Tom Gibson told FOX 13 hazardous materials are the first concern.

Heavy duty hydraulic "munchers" will then literally chew up the inverted pyramid and the one-story retail buildings at the base of the pyramid.

That part of the project will take a couple of months.  What is left will take twice as long to remove.

"This is the 1926 Municipal Pier -- its five acres of concrete out there," Gibson explained.

The decking will be cut into chunks and then removed by truck or with the help of a barge.

Larger pieces of concrete will be used to reinforce nearby seawalls. Everything else will be recycled by the contractor.

Gibson also told FOX 13 one of the two bait houses outside the Pier's main building will be preserved. 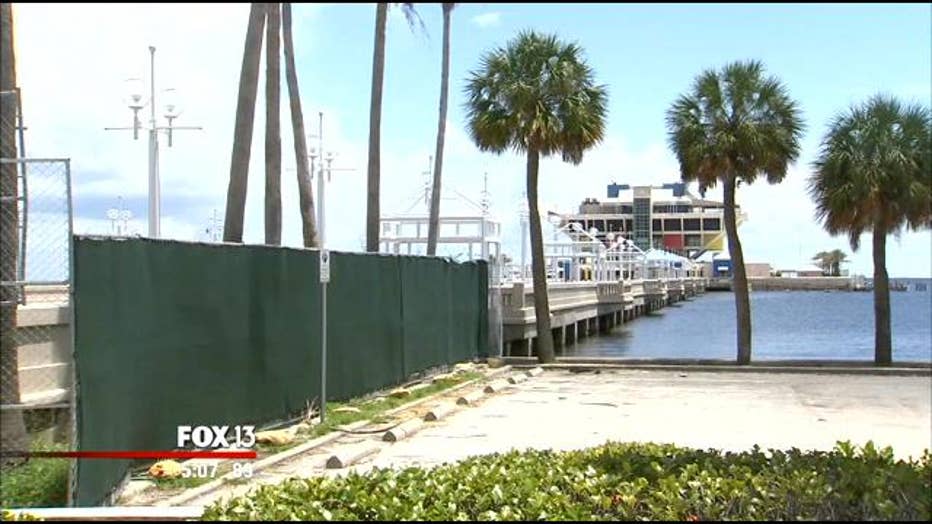 The bait houses also stood outside the 1926 Million Dollar Pier. Docking cleats dating back to the same period have already been set for historic preservation.

As the demolition begins, so does final design work on the replacement pier. The drawings of "Pier Park" shown to the public are conceptual.  Final design drawings may differ, presumably to a minor degree.

"I don't want to see a bait and switch happen here -- that's what we put out to the public," Mayor Rick Kriseman told FOX 13.

Within a couple of weeks the city and its architectural design team will host another round of public input before making final design tweaks.

"I think if there's any changes at all that end up happening, they probably would be more economic driven than anything else," Kriseman added. "We have a budget and we have to stay inside that budget."