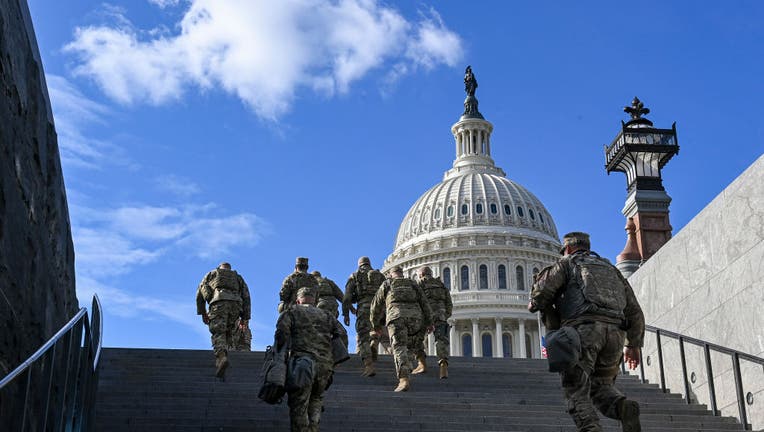 WASHINGTON, DC - JANUARY 18: National Guard troops ascend the stairs from the Capitol Visitors Center onto the East front as security is tight around the Capitol as the country prepares for the inauguration of President-elect Joe Biden and Vice Presi

DeSantis said he made the order Thursday night.

The Florida governor appeared on 'Fox and Friends' Friday morning, saying the Guard's continued presence after the inauguration was "a half-cocked mission at this point."

"They've served our country all around the world, they've served the state of Florida after natural disasters," DeSantis told the Fox News hosts. "They're soldiers, they're not Nancy Pelosi's servants."

The National Guard Bureau said Thursday that of the nearly 26,000 Guard troops deployed to D.C. for the inaugural, just 10,600 remain on duty. The bureau said the Guard is helping states with coordination and the logistics so that troops can get home.

Meanwhile, The Washington Post and Politico reported that hundreds of Guard troops were forced out of areas of the Capitol they had been using for rest breaks and were relocated to a nearby garage. Photos of the troops in the garage drew outrage from lawmakers.

Sen. Tammy Duckworth, an Iraq War veteran, tweeted: "Just made a number of calls and have been informed Capitol Police have apologized to the Guardsmen and they will be allowed back into the complex tonight. I’ll keep checking to make sure they are."

After midnight, Duckworth tweeted an update: "Troops are now all out of the garage. Now I can go to bed." Politico reported that they had been allowed back into the Capitol.

RELATED: National Guard troops return to Capitol after being forced out, relocated to parking garage

Thousands of Guard troops from all across the country poured into D.C. by the planeload and busload late last week, in response to escalating security threats and fears of more rioting. Military aircraft crowded the runways at Joint Base Andrews in Maryland, carrying Guard members into the region in the wake of the deadly Jan. 6 insurrection at the U.S. Capitol.

Guard forces were scattered around the city, helping to secure the Capitol, monuments, Metro entrances and the perimeter of central D.C., which was largely locked down for several days leading up to Wednesday's inaugural ceremony.

The U.S. Secret Service announced that the special security event for the inauguration officially ended at noon Thursday.

The Guard said that it may take several days to make all the arrangements to return the 15,000 home, but it should be complete in five to 10 days. Guard members will have to turn in equipment, make travel plans and go through COVID-19 screening.

Some local law enforcement agencies have asked for continued assistance from the Guard, so roughly 7,000 troops are expected to stay in the region through the end of the month.