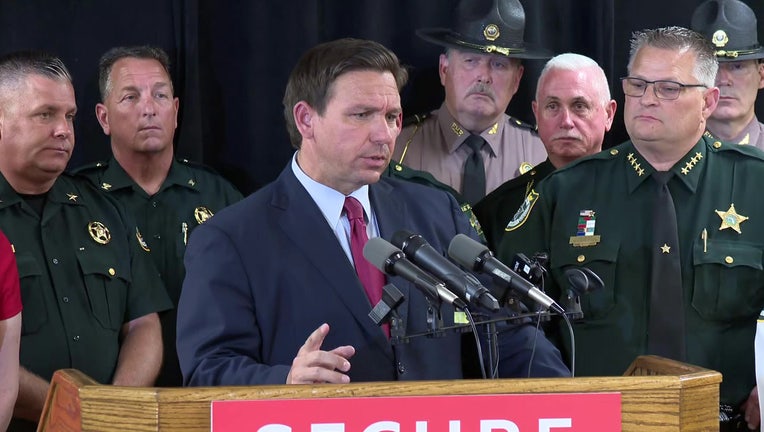 TALLAHASSEE, Fla. - Gov. Ron DeSantis said Wednesday that Florida law-enforcement officers will go to Texas and Arizona to help with border control, as Florida continues to challenge the Biden administration in federal court about immigration enforcement.

DeSantis’ announcement during a news conference in Pensacola came after Texas Gov. Greg Abbott and Arizona Gov. Doug Ducey sent a letter last week to governors of the 48 other states requesting assistance in battling illegal immigration at the border with Mexico.

Details on the number of Florida officers that will be deployed, where they will go and the costs to Florida taxpayers have not been determined, DeSantis said. In addition to the Florida Highway Patrol, the Florida Department of Law Enforcement and the Florida Fish and Wildlife Conservation Commission, the DeSantis administration said commitments to send officers have come from the Brevard, Escambia, Hillsborough, Holmes, Lee, Okaloosa, Pasco, Santa Rosa and Walton county sheriff’s offices.

"The Biden administration ended effective policies that have been implemented by President Donald Trump to curb illegal immigration across the Southern border," said DeSantis, who was flanked at the news conference by Attorney General Ashley Moody and law-enforcement officers. "They have revoked policies designed to secure our border and keep Americans safe."

But Rep. Anna Eskamani, D-Orlando, called the action by DeSantis "another political stunt."

"Instead of perpetuating the attacks on immigrants and going after (the) Biden Administration, why don’t you focus on the people who live in Florida," Eskamani said in a Twitter post. "We’re dealing w/a broken unemployment system and affordable housing crisis that you could be fixing!"

RELATED: Gov. Greg Abbott says Texas will build a border wall, but doesn’t yet give details on cost or location

The announcement came two days after Moody’s office filed a brief urging a federal appeals court to block Biden administration immigration-enforcement decisions. The state went to the 11th U.S. Circuit Court of Appeals after U.S. District Judge Charlene Edwards Honeywell rejected a request for a preliminary injunction in a lawsuit that Moody filed in March.

The lawsuit focuses on memos issued Jan. 20 and Feb. 18 by the U.S. Department of Homeland Security and U.S. Immigration and Customs Enforcement about immigration enforcement, with Moody contending that the directives violate immigration laws and what is known as the Administrative Procedure Act.

Moody contends that the Biden administration has shirked its responsibilities in enforcing immigration laws and threatened public safety.

"The public interest in enforcing the immigration laws is significant, particularly for dangerous criminal aliens," said the 59-page brief filed Monday. "So, too, is forcing federal agencies to comply with the law. And the harm to Florida and the public, including the public-safety nightmare created by the memos, outweighs any harm to defendants (the federal government)."

But in rejecting the requested preliminary injunction, Honeywell on May 18 ruled that the memos were "interim policies" that were not final actions by the federal agencies and, as a result, were not subject to judicial review. She also wrote that the memos prioritize immigration-enforcement decisions, such as focusing on cases involving national security, border security and public safety.

"The guidelines are just that; they are not statutes and do not have the status of law as they constitute a prioritization and not a prohibition of enforcement," Honeywell, a judge in the federal Middle District of Florida, wrote. "The policies do not change anyone’s legal status nor do they prohibit the enforcement of any law or detention of any noncitizen. The prioritization scheme does not necessarily have a direct day-to-day impact on Florida, although certainly an indirect impact can be claimed."

A panel of the Atlanta-based appeals court is scheduled to hear arguments the week of Sept. 20 in Miami.

DeSantis, who is increasingly being viewed as a potential Republican presidential candidate in 2024, and Moody blasted the Biden administration during Wednesday’s news conference.

Moody said the administration "took a wrecking ball to the infrastructure controlling immigration."

DeSantis contended that drug trafficking and human trafficking have increased since the change in White House administrations.

"If that border was under control, we would have less meth pouring into Florida communities and particularly in the northern part of the state," DeSantis said.