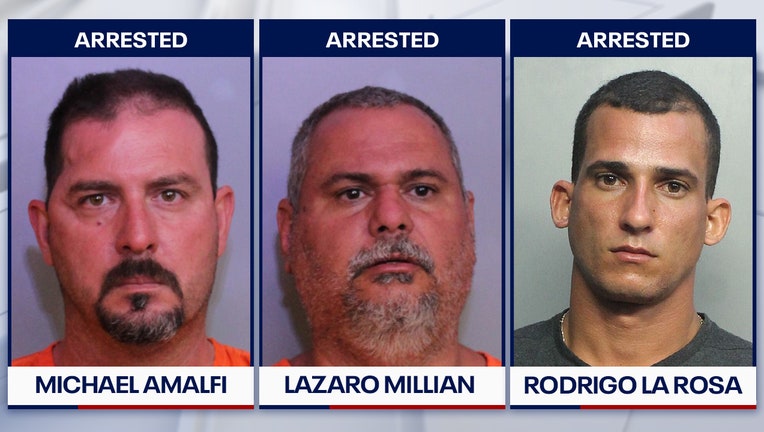 AVON PARK, Fla. - The third suspect involved in running over a Florida Fish and Wildlife Conservation Commission officer was found in South Florida, according to Polk County officials. The other two were arrested over the weekend.

The suspect was identified as 27-year-old Rodrigo Alberto Mato La Rosa, who has a Hialeah address. As of Monday morning, the sheriff’s office says he is in custody in Miami-Dade and will be transferred to Polk County at a later date.

The FWC officer who was injured has since been released from the hospital. The incident took place Saturday around 9 p.m. at the River Ranch Hunt Club, a private hunting camp of about 88,000 acres in Polk County.

PREVIOUS: PCSO: 2 arrested, 1 on the run after FWC officer run over by ATV

In a news conference Sunday, Sheriff Grady Judd said an FWC officer received reports of people night-hunting in the area. The responding officer noticed a light and two ATVs and began following the men on foot.

Then, the sheriff said, the officer heard a gunshot. He approached the men, took two shotguns, and engaged them in a conversation.

Judd said that’s when Amalfi, who is from Miami, jumped on the officer and began fighting him. Another suspect fought the officer. Then, Millian, who is on probation for grand theft, fled in one of the ATVs.

The officer was then run over by the side-by-side, Judd said.

"After beating him and hitting him with the side-by-side, these men left the officer an hour deep in these woods and didn’t care if he survived," Judd said during a press conference on Sunday.

A perimeter was set up, and the sheriff’s office helicopter from Osceola County spotted one of the ATVs, which was submerged in water. A cell phone was found at the scene.

Sheriff Judd said a search warrant was obtained and officials learned the cell phone belonged to Amalfi. They said he had a camp in the area.
By sunrise, law enforcement had Amalfi and Millian in custody.

"These folks from Miami made a mistake when they set up camp in Polk County and then wanted to attack one of our officers up here," Judd said. "We don’t accept that."