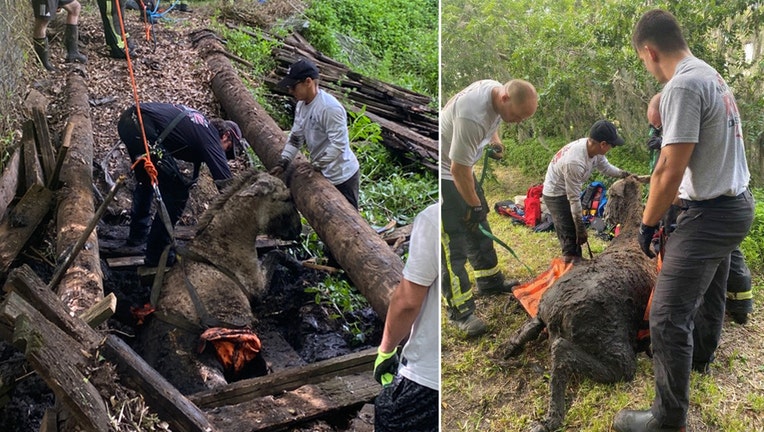 PALMETTO, Fla. - A lucky donkey was rescued after falling through a bridge over a creek bed in Palmetto.

The Bradenton Fire Department and North River Fire District were called to 2726 37th Street East for a large animal rescue on April 30. When they arrived, they found the donkey – about 400 to 500 pounds – with its hind legs and back half of its body completely submerged in water.

Its front half was dangling on what remained of the wooden slat bridge.

Bradenton Fire said the donkey's owner and some friends had been working to remove bridge slats in order to free the animal. 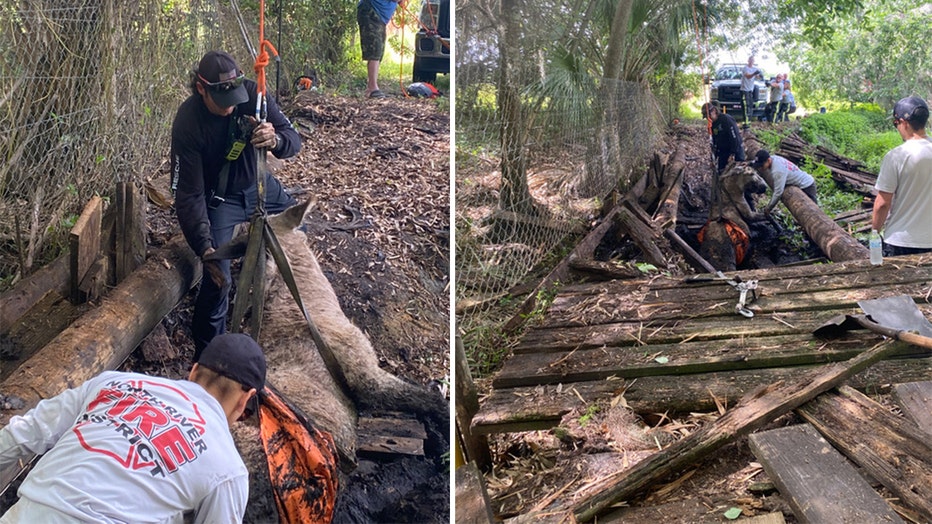 First, they tried to free it using a tractor on the scene. Then they used a so-called mega mover and tow strap as a makeshift bridle. When the bridle was hooked to the tractor, the operator slowly reversed it – but crews realized that a horizontal drag could potentially injure the donkey, given its position.

They stopped and decided to lift vertically with the help of a tree branch "for a high point change of direction" using a fire crew vehicle as the anchor point. It worked, and the donkey was free from the mud.

READ: 45 years later, Trans Am from 'Smokey and the Bandit' lives on in Palmetto

Then, they moved the donkey horizontally to the drier area and lowered it back down to the ground.

The donkey was carried out of the creek and searched for any injuries. None were found.

"The owner had been on the phone with a large animal vet, who said the best thing for the animal would be standing and trying to get him to use his hind legs," according to North River Fire Rescue. "Crews used the mega mover to raise him off the ground, he was able to stand on his front legs, but we had to support his back side."

In this position, crews manually began moving the donkey's hind legs, hoping it would bring the circulation back. Shortly after, they said he began to bear weight on his left rear leg, but not on its right rear leg.

It was time to move the donkey again. The owner asked if the crews can transport it to his barn, and they accomplished it by using a mega mover and walking it across the property.

"Once at the barn," fire rescue officials said, "we helped the owner tie the mega mover to some posts to help support the donkey’s backside."