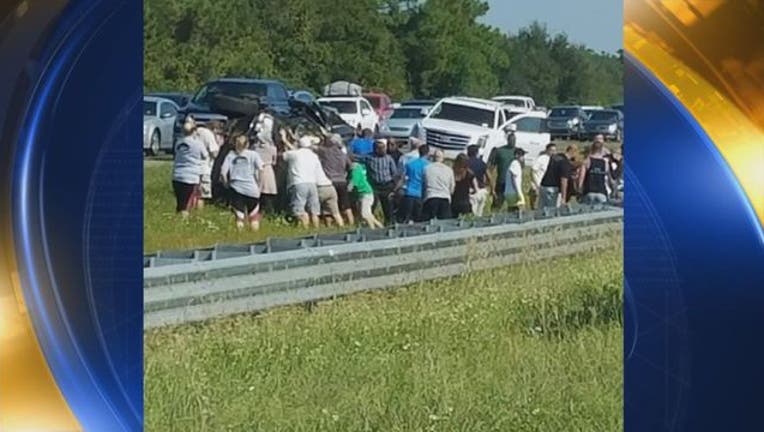 GIBSONTON (FOX 13) - What would you do if you saw a car swerve off I-75, hit a guardrail, flip and end up on its roof? Dozens of people stopped to help on Saturday when that very thing happened before their eyes.

A mom and her 2 daughters were in the vehicle.

One eye witness, who prefers to remain anonymous, was driving to Orlando with his family.

When he saw the calamity, he said an ominous thought immediately raced across his mind: "I don't think anyone is getting out of that vehicle," he told FOX 13.

But they did, possibly because of the quick thinking and actions of a number of Good Samaritans.
They pulled out the mom and one of the girls who were trapped inside the Ford Expedition.

The second girl remained pinned underneath the SUV.  A handful of rescuers tried to lift the vehicle off the child, but they weren't strong enough. But there is strength in numbers— eventually the crowd grew, and together, they were able to raise the SUV.  The girl was able to get out and get medical attention. All three family members are alive and were taken to Tampa General Hospital.

But, not everyone sees what these highway Good Samaritans did as heroic.  Paramedics say you should not move anyone after an accident. They recommend that people leave that to the medical professionals who are trained to do it the right way.

Regardless, the incident underscores that there are still good people out who are willing to step in if a fellow human being needs help.